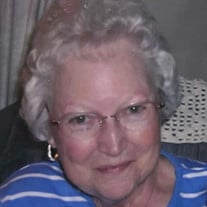 Edna “Babs” (Platt) Friedlein, passed away on June 9, 2022, in St. George, UT. She was born on August 6, 1925, in Rockville, UT to William Grant and Edna (Langston) Platt. She married John F. Friedlein in Gary, Indiana, on September 8, 1945. Babs was raised in Reno, Nevada, where she met Johnny. They corresponded throughout the war while she trained with the Army Nurse Corps in Hastings, Nebraska, and he served overseas. She and John married and lived in Gary, Indiana until 1948, when they moved to Hobart. She enjoyed camping and fishing with her family and was very active in Hobart Jr. and Sr. High Band Mothers Assn. and the First United Methodist Church. “Service” was her life, for her family, friends, and community. She was the 4th of 10 children, preceded in death by husband John, brothers Bryce, Orion, Earl and Barry Platt and sisters Paula O’Lary and Mina Curran, sons-in-law Jeff Clark and Mike Hanna. Babs is survived by Brother Thomas Platt, sisters Diana Cessna and Willa Mae Pavlakis, and her 3 children Patti Clark, Penny Thomas, and John (Debbie) Friedlein, 10 grandchildren, 29 great-grandchildren, and 7 great-great grandchildren, numerous nieces and nephews including her self-proclaimed “favorite” Neil Platt. The family would like to thank MANY special friends and loving neighbors who graciously loved and cared for Babs, including Martha Carnahan, Dr. Phillips, Zion’s Way Hospice of St George, St. George Rehabilitation and Care Center, and Serenity Funeral Home of Southern Utah. A memorial service will be held in Hobart, Indiana late July.

The family of Edna "Babs" Friedlein created this Life Tributes page to make it easy to share your memories.

Send flowers to the Friedlein family.