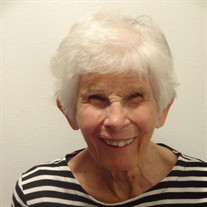 Eleanor Beckett Hall, 93, passed away peacefully on July 23rd, 2020, surrounded by her loving family. Ellie was born in Fall River, Massachusetts on November 10th, 1926. She had only one sibling, her sister, Elisabeth, and the two of them were close their entire lives. She grew up in the Boston suburbs, summering at Horseneck Beach, and enjoying her early schooling, stating once that, “I liked almost all of my teachers.” Ellie was an avid reader as a child, and remained so throughout her life. When just five years old, Ellie began having nightmares, and her parents wondered why. The Lindbergh baby kidnapping was all the news of the day, and little Ellie seemed to be quite knowledgeable about it as she questioned the adults. It baffled them as to how and where she was getting this information, and it is then that her father discovered her in the basement reading the Boston Globe, in a corner where he stored them, soaking in all of the news about that terrible crime. Ellie and Ronald Wallace Gordon, Sr. married in Newton Massachusetts in 1952. They had three children in the Boston area (Ronald Jr., John and Elisabeth) and moved to Connecticut in 1960 where the children were raised. Ellie worked for 26 years for Pratt & Whitney Aircraft as an administrative assistant, while Ronnie published a local newspaper. After Ronnie’s death, in 1976, Ellie married Duncan Hall in the LDS Temple in Washington, DC, and they moved to Florida. When Duncan passed in 1982, Ellie moved west to San Diego to be closer to John and his wife, Sue, and “Little Ronnie”. Ellie quickly earned the reputation of being the one always willing to drive people wherever they needed to go. While doing so, she earned the additional reputation of NOT always knowing where she was going. In 2005, shortly after Little Ronnie’s passing, Sue and John left California to head to St. George, Utah. Ellie followed shortly after, setting up her new home near her sister, Elisabeth, and her husband, Don, in Salt Lake City. She spent many years as a Family History Missionary, serving her beloved Church of Jesus Christ of Latter Day Saints. After being released as a missionary, Ellie served as an ordinance worker in the Salt Lake Temple, often serving 3-4 days a week. She loved working in the Temple and was sad when she had to give it up for health reasons. While in Salt Lake, always one to do her civic duty, Ellie paired up with her good friend Betty Leithead to assist the local police department on the local neighborhood watch beat. While driving on their rounds one day, they heard a dispatch of a man attempting to abduct a 12 year old girl. Ellie and Betty no sooner heard this as they turned the corner to see the suspect vehicle. They followed the car until the police moved in to arrest him. It is then that Ellie and Betty earned the moniker of “vigilante grannies”. They made the newspapers, and were decorated by the Mayor! Ellie was quoted in the paper, when asked what she thought of the guy; she replied, “Oh, he was a dilly!” Ellie’s health began to decline in 2013 and she ended up in a rehabilitation center in Salt Lake City where the doctors proclaimed she would remain for the rest of her days. Seven weeks later Sue and John received a call to come and get her, as she was doing so well that they needed her to go home. John and Sue went to the rescue, and as Ellie had given up her apartment, they took her to their home in St. George where she lived from 2013 to 2019. After suffering a fall in September of 2019, Ellie went to Seasons Health Care in St. George where she remained until July 2020, when her family took her home to care for her until she passed away. While at Seasons, Ellie thrived, keeping her mind sharp with her word search puzzles and reading. Having been blessed with the gift of gab, Ellie easily befriended all whom she met there, as she had done, wherever and whenever, she had ventured throughout her life. Her last months were challenging, however, as the Covid-19 virus caused nursing homes to “lock down”, and no one could get in to visit her. Her greatest frustration was that she could not go out for her weekly car rides with John and his dog, Sophie, who Ellie adored. Ellie leaves many to cherish her memory: her son, John, and his wife Susan, of St. George, Utah, who cared for Ellie in her later years with unfailing kindness and love; her daughter, Elisabeth Gordon of Connecticut, who came west often to visit her mom over the years and was there for Ellie at the end; her three nieces; Stephanie Bare and her husband Tom, Catherine Grangent, and Christine Stockelman and her husband Chris, “Fuzz”, two great nephews and one great niece. She also leaves five grandchildren; Chris Gordon, Lisa Phipps, Peter Gordon, Abby Gordon and Finn Gordon, fifteen great-grandchildren, and five great-great grandchildren, with another one on the way. Ellie is predeceased by her first husband, Ronald W. Gordon, Sr., her younger sister, Elisabeth Ballou, her eldest son, Ronald W. Gordon, Jr., and her husband, for time and all eternity, Duncan Hall. Ellie will be missed by all who had the pleasure of knowing and loving her. The family will hold a private memorial service in the near future. ~ The Gordon family would like to express their love and gratitude to Georgia and Allen Chantrill, (Sue’s brother) who opened their hearts and their home so that the family could be together with Ellie in her last days. Also to the kind folks at Seasons HealthCare Center for their tender care during Ellie’s time there.

Eleanor Beckett Hall, 93, passed away peacefully on July 23rd, 2020, surrounded by her loving family. Ellie was born in Fall River, Massachusetts on November 10th, 1926. She had only one sibling, her sister, Elisabeth, and the two of them were... View Obituary & Service Information

The family of Eleanor Beckett Hall created this Life Tributes page to make it easy to share your memories.

Send flowers to the Hall family.