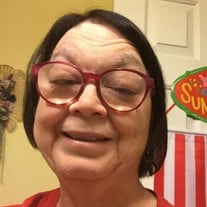 Elizabeth McClellan Perkins passed away peacefully December 11, 2021, after a brief illness. She was born on January 30, 1954, in Salt Lake City, Utah to Joan Elizabeth Fechser McClellan and Kenneth George McClellan. Elizabeth was born with several health and life challenges including deafness, legal blindness and a heart condition. The doctors did not hold out much hope for this newborn baby and told Liz's parents as they left the hospital that "maybe a mothers love can do what we haven't been able to do". Not until age three did Elizabeth's mother Joan suspect that her young daughter might be deaf. Leaning over her sleeping baby she yelled ELIZABETH, ELIZABETH! She did not move, Joan realizing that Liz could not hear her and said to her daughter "I love you just the way you are with your poor little heart and thick little glasses". As a baby and a small child, Elizabeth underwent several surgeries for her eyes and a heart surgery by then renowned heart surgeon Dr. Russell M Nelson (current President of the Church of Jesus Christ of Latter-day Saints). After her heart surgery, Dr. Nelson approaching two frightened parents, said with a look of almost reverence "Everything went beautifully. I couldn't have asked for things to go any more smoothly. That little soul is going to be just fine!" These critical and successful operations contributed to Liz's long life and made it possible for other doors and blessings to be opened to her. One blessing came when six-year-old Elizabeth was accepted to Perkins School for the Deaf and Blind in Boston, Massachusetts. This opportunity and challenge required Elizabeth to be away from her family for months at a time. At first, this was an impossible challenge for young Elizabeth to understand and was heart wrenching for her parents. But, over time, Elizabeth grew to appreciate Perkin's School and the education she gained there taught her many important skills which would later help her throughout her life. In March of 1976, while attending a BYU workshop event and activity at Lagoon amusement park, Elizabeth met Dave Perkins (who was also deaf and legally blind). They're initial meeting did not go well. As Dave described it, "I acted out of character and pushed Liz to ride the roll-o-plane in a teasing way" She was furious and frightened, and it took another six years of friends coaxing them before they began to speak to each other again. But after perseverance, by both Liz and Dave, their relationship mended, and they grew to love each other and become married. Elizabeth's mother described it this way "Perkins! Mrs. David Ross Perkins! That would be Elizabeth's name. That name had become quite significant in her life! Liz attended Perkins School, her interpreter in High School had been Susan Perkins, and now she herself would become Mrs. Perkins!" Elizabeth married David Ross Perkins on Oct 16, 1982, in the Jordan River Temple in Salt Lake City, Utah for Time and all Eternity! Liz and Dave had 38 incredible years together! They lived for many years in California and later in St. George, Utah where they were actively involved in their deaf communities and the Church of Jesus Christ of Latter-Day Saints. One year ago, Liz and Dave were separated for the first time since their marriage began when Dave passed away. The heartbreak at times was almost too much for Liz to bear, but with the help of family, her branch members and community, and her social media friendships, Liz pushed on until at last the day she longed for came and Liz was reunited with her precious Dave! We love you sweet Liz! 🤟 Elizabeth was preceded in death by her husband Dave Perkins, parents Ken and Joan McClellan, and brother Paul; and a brother-in-law Neil Cox. She is survived by her siblings, Mary (David) Lattin, David (Tammy) McClellan, Becky (Steve) Erickson. Also, Liz has many nieces and nephews as well as great nieces and great nephews, all of which loved her dearly. Our family wishes to express our sincere love and appreciation to the many friends and community members who loved and supported Liz and Dave over the years! Viewing and Funeral services to be held December 13, 2021, at the St. George 7th ASL (American Sign Language) Branch at the Southwind church building at 1155 N. 1400 W., St. George Utah. The Viewing will be from 4:00 – 4:50pm, the funeral will begin at 5:00pm. Interment will take place at the Wasatch Lawn Memorial Park in Salt Lake City, UT. Funeral Services will be available live stream via zoom at https://us06web.zoom.us/j/83500190379?pwd=cFZtOTY1YUczcVlueGFmSGFSbENhQT09 Arrangements are under the direction of Serenity Funeral Home of Southern Utah, 435-986-9100.

The family of Elizabeth McClellan Perkins created this Life Tributes page to make it easy to share your memories.

Send flowers to the Perkins family.