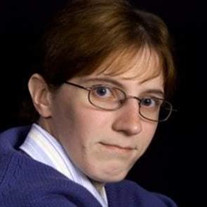 Washington, UT – Eva Marie Sevald (Thomas), 37, passed away unexpectedly and far too soon on Friday, January 3rd, 2020, in St. George, UT. She was born on July 21st, 1982 on Moody AFB in Valdosta, GA to Harold and Carol Thomas (Anthony). Roughly seven years later after her father retired from the United States Air Force, her family moved to her mother’s home town of Laurium, MI in the Keweenaw peninsula on Lake Superior where she continued to grow up as a “Yooper” and enjoy life with her four siblings and playing the trombone. In her teen years the family moved downstate to the suburbs of Detroit and eventually to St. George, UT in the year 2000. In St. George Eva held several kitchen and head chef positions in various nursing homes and later Dixie Regional Medical Center. In 2001 Eva met a handsome fellow named Matthew Sevald of Detroit, MI who later tricked her into marrying him on June 1st, 2006 in San Antonio, TX where he was stationed as a United States Marine convalescing from injuries sustained fighting the War on Terror in Iraq. Eva and Matthew returned to the Detroit area upon his discharge from the service and struggled in the depressed economy as a newly married couple. They were blessed, however, to have their first child born to them and shortly thereafter moved to St. George to get on their feet with the generous assistance of Eva’s parents’ spare room. Matthew still misses experiencing more than one type of weather in a day and green things. Over the next 12 years Eva would become mother to three more beautiful children. She tirelessly and selflessly helped support her family with a Materials Management position in the Cath Lab of Dixie Regional Medical Center, during which time she earned the prestigious Six Sigma Yellow Belt for process improvement and oversaw the expansion of her responsibilities to cover multiple departments within Cardiovascular Services, millions of dollars of inventory, and also provide assistance to other departments with a new system of organizing supplies. Eva also managed her household with expertise and ensured her five children (husband included) had everything they needed for school, opposite work shifts, and nursing school. Determined not to waste any energy, Eva also served for the last five years on the leadership committee of Cub Scout Pack 4802 at the St. George Catholic Church during which time she was awarded the District Award of Merit, and she served on the Board of Education and “Trintabulum” hand bell choir at Trinity Lutheran Church and Academy where her children attend school and her family attends religious services. Eva’s hobbies in her precious and insufficient spare time included road biking, participating in endurance obstacle courses such as the “Spartan Race” (for which she earned a much-deserved and often boasted about ‘Trifecta’ medal), taking thousands of pictures of her children, shooting firearms, playing the trombone, cleaning the house with blaring bagpipe and country music, helping her children pursue sports, patriotic displays, and most recently vinyl application as décor on shirts, mugs, and walls, etc. She is survived by her husband Matthew; children Peter James (12), Lillian Marie (10), Charlotte Ruth (3), and Jonathan David (16 mos); father Harold and mother Carol; sister Kate (Darren); brothers Andrew, Steven, and Bradley (Jayla); aunts Diana (David) and Sandra; and many cousins, nieces, and nephews throughout the United States and Canada. She was preceded in death by her grandparents, Robert and Dorothy Anthony (Ala). The family would like to thank the entire staff of Dixie Regional Medical Center, particularly those in the Emergency Department, Neuro Surgery, Imaging, and the Intensive Care Unit who worked so tirelessly and professionally to attempt to save Eva and who have shown the utmost respect in privacy and in loving support. There are no words to express adequate gratitude. Additionally, great appreciation is extended to Serenity Funeral Home for their humble and genuine caring guidance and support of services throughout this untimely tragedy. Lastly, but certainly not least, the family wishes to express the deepest and most sincere gratitude to all friends and family who have come forward to pray, to reminisce, and to offer such generous monetary, food, cleaning, and child care assistance. The Lord has blessed us greatly in this time of sorrow. In lieu of flowers the family requests prayers for peace, acceptance, and for Matthew to be the best father possible for his children in a way which honors Eva and keeps her memory alive. The family also wishes to encourage everyone to consider the thoughtful and precious gift of organ donation as a means of helping others and furthering the legacy of those who pass. Funeral services will be held on Thursday, January 9th, 2020 at 11 am at Trinity Lutheran Church, 2260 Red Cliffs Dr., in St. George, UT. Family and friends are invited to share tributes online at www.serenitystg.com. Arrangements and memorial tree planting by Serenity Funeral Home of Southern Utah, 435-986-9100

The family of Eva Marie Sevald created this Life Tributes page to make it easy to share your memories.

Send flowers to the Sevald family.