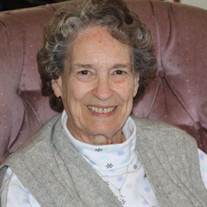 Florence B. Moffitt, 91, of Washington, Utah went home to our Lord on Sunday, February 2, 2020 at The Seasons Health and Rehab in St. George, Utah. She was born on May 20, 1928 in Williamsport, PA, the daughter of Ruby Hill Lutz and John Lutz. She was raised by her Aunt Florence Hill in Williamsport, PA until she was 10 years old and then raised by her mother and step-father, Ruby and Ellwood Braunbeck in Binghamton, NY. She graduated from Binghamton Central High School and then attended the RN Nursing School at Binghamton General Hospital. She married Robert B. Moffitt, Jr. on October 31, 1948 in Binghamton, NY. Florence and Robert lived in Binghamton, NY for much of their life and then moved to Clifton Park, NY to be close to 2 of their children. Her husband, Robert , died in 2006 and Florence moved with her daughter, Sharon Allgaier, to live in Washington, Utah. In 2007. She was a dedicated wife, mother and homemaker. She was always there for the needs of her family that she always put first in her life. She worked for a time at Crystal’s Store on Robinson St. in Binghamton, part-time in the office at the Tabernacle United Methodist Church and later at Rivermede Manor Nursing Home in Binghamton, NY. She sewed items for her family, embroidered tablecloths and a bedspread for gifts for relatives and friends and made latch hook rugs for gifts. She was a member of the Tabernacle United Methodist Church in Binghamton and a member of Eastern Star. She transferred her church membership to Clifton Park United Methodist Church when she lived in Clifton Park, NY and later when she moved to Utah, she transferred her membership to the Shepherd of the Hills United Methodist Church in St. George, Utah. She is survived by a half sister, Dorothy Briggs, a sister-in-law, Frances Braunbeck, her children: Debera Blasczak of Clyde, NY, Sharon Allgaier of Washington, Utah and Robert (Diane) Moffitt of St. George, Utah as well as 7 grandchildren, 8 great grandchildren and several neices and nephews. She is predeceased by her parents, her husband, Robert Moffitt Jr., her step-brother, Paul Braunbeck, her half-brother, Ellwood Braunbeck Jr., and a grand-daughter, Dawn Blasczak. A memorial service will be held in the future at the Shepherd of the Hills United Methodist Church and later, in the summer, there will be a graveside service at the Gerald B.H. Solomon Saratoga National Cemetery where she will be buried next to her late husband.

Florence B. Moffitt, 91, of Washington, Utah went home to our Lord on Sunday, February 2, 2020 at The Seasons Health and Rehab in St. George, Utah. She was born on May 20, 1928 in Williamsport, PA, the daughter of Ruby Hill Lutz and John Lutz.... View Obituary & Service Information

The family of Florence B. Moffitt created this Life Tributes page to make it easy to share your memories.

Florence B. Moffitt, 91, of Washington, Utah went home to our...

Send flowers to the Moffitt family.