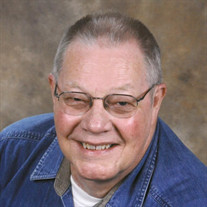 My sweet husband, Floyd Stewart Tracy, passed away at his home in Hurricane, Utah at the age of 77 on Tuesday, April 16, 2019. Stewart was born March 3, 1942, in Brigham City, Utah to Floyd Lindsay Tracy and Roberta Rasmussen Tracy. Stewart spent his early years in a little town on the Utah Idaho border called Yost. When he was 12, his family moved to Brigham City, Utah, where he finished his school years. After high school, he went to Weaver Airline School in Chicago. After finishing training in Chicago, he moved to Phoenix. He worked for Bonanza Airlines, doing whatever involved flying. I think flying was his first love. He loved to fly, and was sorry to lose his pilot’s license due to diabetes. During his stay in Phoenix, he was drafted into the army and spent two years serving during the Vietnam War. Returning to Phoenix, he met and married Judith Marie Omen. Two children were born to this union, Kim Tracy of Bountiful, Utah, and Brad (Mardi) Tracy of Kaysville, Utah. He also has two grandsons, Tyson and Mason Tracy. Stewart and his family later moved to Las Vegas, and then to Bountiful, Utah. Stewart worked as an air traffic controller in the weather division and retired in 1995 from the facility in Cedar City, Utah. Stewart met and married me, Vickie Fullmer, from Burley, Idaho in 1989, and we were sealed in the St. George LDS temple in 1993. Stewart and I have lived in Cedar City, Utah, Paragonah, Utah, Preston, Idaho, and finally, Hurricane, Utah. Stewart said we are going far enough south, so we won’t have to shovel snow, and Hurricane became our home. Stewart has struggled with many health issues these past eleven years. He always tried to remain pleasant through them all. I will miss him terribly, and love him dearly, but we will be together again. Stewart knew our Heavenly Father loved him, and he knew the gospel to be true. Stewart chose not to have a service, he was kind of a private person, and he didn’t like people making a fuss over him. I would like to thank the many medical providers who have taken such good care of my sweetheart all these years. Their service is truly appreciated. Fly high my angel, till we meet again.

My sweet husband, Floyd Stewart Tracy, passed away at his home in Hurricane, Utah at the age of 77 on Tuesday, April 16, 2019. Stewart was born March 3, 1942, in Brigham City, Utah to Floyd Lindsay Tracy and Roberta Rasmussen Tracy. Stewart... View Obituary & Service Information

The family of Floyd Stewart Tracy created this Life Tributes page to make it easy to share your memories.

My sweet husband, Floyd Stewart Tracy, passed away at his home...

Send flowers to the Tracy family.