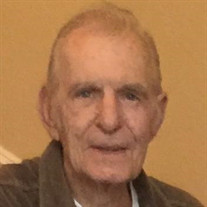 Frank Irvin Raduziner passed away on Tuesday July 17, 2018 after a long battle with cancer with his family by his side. He was born November 14, 1932 in New York. During his childhood his parents (along with his brothers and sisters) made the long trek by car to Southern California where they established roots and where Frank would end up spending most of his adult life. Frank joined the Army in 1949 at the age of 16. He served overseas in occupied Japan after WWII and was sent to Korea in 1951 as part of the United Nations action due to the war. After serving in Korea, Frank met and then married the love of his life, Leonora (Lee) Louise Mueller on April 21, 1956. They just celebrated their 62nd wedding anniversary this year. After his retirement from The L.A. Department of Water and Power in June of 1989, a job he took great pride in. Frank and Lee fell in love with Bloomington (Utah) and they ended up moving to St. George, Utah in October of that year. He always enjoyed hosting his extended family and being the impromptu "tour guide" of all the beautiful sights Southern Utah has to offer. An avid fan of history, war and politics, Frank loved to call his local radio station to "debate" anything and everything (and to maybe just get a rise out of them). Lovingly referred to by his brothers and sisters as "Snapper" and his kids and grandkids as "Poppy" this "one of a kind" will be dearly missed by everyone that loved him. His bigger than life personality, hysterical sense of humor, loving heart and ever growing family will be his greatest legacy. He may be gone, but he will never, ever be forgotten. He was proceeded in death by his mother- Lois Somers, brother- Don Raduziner, brother- Ray Raduziner and sister- Ruth Breece. He is survived by his wonderful wife- Lee Raduziner and children: daughter- Donna Siebers and husband Jim, son- Jim Raduziner, daughter- Karen Raduziner, son- Frank Raduziner and wife Venee; siblings: brother- Bob Raduziner, sister- Mary Hymer, sister- Carol Eoff, grandchildren: Marshall Raduziner, Jennifer Wolff-Gillispie, Brandon Lankin, Tia Rupert and husband James; great-grandchildren: Brittany Edwards, Kaiden Raduziner, Kodie Gillispie, Elle Raduziner and Donnie Gillispie; great-great-grandson- Braxton Sawyers and MANY other family members and friends.

Frank Irvin Raduziner passed away on Tuesday July 17, 2018 after a long battle with cancer with his family by his side. He was born November 14, 1932 in New York. During his childhood his parents (along with his brothers and sisters) made the... View Obituary & Service Information

The family of Frank Irvin Raduziner created this Life Tributes page to make it easy to share your memories.

Frank Irvin Raduziner passed away on Tuesday July 17, 2018 after...

Send flowers to the Raduziner family.