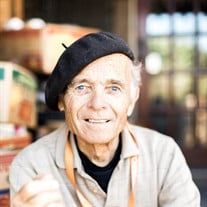 If you are reading this and are finding yourself caught off guard, take a moment to breathe, sit in the beautiful sunshine wherever you are, and ground yourself. This is one of the many adventures with Fred we weren’t quite ready for. In the end, we learned something new, made a new friend, and at the end of the day, feel full of light and gratitude for the unexpected experience. Dr. Fred Wallace Bohman, A.K.A. Dr. Dirt, was born April 13th,1943, and left his physical body on April 20th, 2021 @ 8:00 pm in the comfort of his own home. He was surrounded by the best versions of himself - his children, Ian, Jael and Lyron. If you had the opportunity to know him, or even just bump into him, then you know the cute little man impressively pulled off a beret, and it became a staple to his everyday wardrobe that no one will forget. Fred is a man who, we can all say, has left this world a better place. From making a stranger feel seen and important in the checkout line, or feeding anyone who may or may not need food in their fridge, to finding ways to make treasures out of what others may see as trash. Fred helped change perspectives of the people around him. After meeting him, you will most likely have the desire to start a garden, plant a tree, or get yourself some chickens. You will try things you never thought you would try, and enjoy people and places you never had on your radar. Fred never stopped being a student so he could always be the greatest teacher - and teaching was one of his purest passions. Making sure people knew how to eat well, grow the best food, and survive off the land was his life-long legacy. He would always reassure you that you are capable of accomplishing anything., and at the end of the day, he would always ask you, “What did you learn today?” People were another one of his passions. Building lasting relationships with people from all walks of life – he didn’t care if you didn’t think you deserve his time – he wanted to know you and help you grow in any direction in life you chose. Throughout his life when meeting someone new, he would always remind us kids to, “Look them in the eyes, give them a firm handshake, and don’t forget their name, because people matter” Fred valued many things in his life. Obviously, great food, people and teaching, but on the simple side of things, vinyl music from the 60’s and 70’s would be playing throughout the house so he could dance with his children at any point. While preserving and canning food in his kitchen, surrounded by many hands willing to jump in and help, there were always lots of laughs, love and happy energy. He traveled the world and had impact everywhere he landed. He had stories that had you in disbelief and buckling over with laughter. He may never have been on time to anything, but that was only because what he was doing in the moment was equally important to him. During any holiday it wasn’t about what he could do for the family, it was what the family could do for everyone else. He taught us that holidays were happy times, but also times of need for coat drives, dropping off gifts, frozen turkeys, and even bouquets of flowers. It was the simple gestures that brought the most joy when needed. There will be no funeral service and In lieu of sending flowers, Fred would want you to go plant something. Instead of sending a card of bereavement to the family, he would want you to perform an act of kindness to a stranger. As a family, if you have ever had an encounter with Fred, we are asking that you share those memories, stories, and/or pictures, no matter how big or small. Please send them to [email protected] We have also set up a website to share these memories and pictures for all to enjoy at drfredbohman.com so his memories can live on forever.

If you are reading this and are finding yourself caught off guard, take a moment to breathe, sit in the beautiful sunshine wherever you are, and ground yourself. This is one of the many adventures with Fred we weren&#8217;t quite ready for.... View Obituary & Service Information

The family of Fred Wallace Bohman created this Life Tributes page to make it easy to share your memories.

If you are reading this and are finding yourself caught off guard,...

Send flowers to the Bohman family.