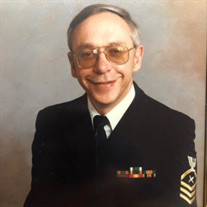 Freddie David Paul age 74 passed away on October 24, 2021, at St. George Regional Hospital. Freddie was born in Denver Colorado to Neola Patricia Wilde. He married the Love of his life, Rosemary Helen Morrison, on February 3, 1979, at The Brechan Cathedral in Brechan Scotland. Freddie was raised in Moab Utah until he in listed in the US Navy where he honorably served for 22 years, he was a Chief Petty Officer. He worked for TRW- NASIG Northrop Grumman and AT&T also. He obtained a bachelor’s degree from Anne Arundel Community College in Arnold Maryland. He Lived most of his life in Hanover Maryland until he and his wife moved to Ivins. Freddie enjoyed the loving companionship of his dog Teapot, Fishing, going to Movies and going to Yard sales where he loved to negotiate prices. He Loved his two boys, his wife, and grandchildren more than anything. Freddie is survived by his wife Rosemary, his two sons Donald (Jamie) and Steven (Kelli) and his 3 Grandchildren Steven Jr, Tristan, and Chandler, his brother Gordon (Symantha) Bone and his two sisters Jerie (Jerry) Sherman and Patricia Woods, and his Cousin Bobby Sherman, and Numerous Nieces and Nephews and Great Nieces and Nephews. Freddie was preceded in death by his mother Neola Patricia Wilde, his cousin Vickie his Aunt Verla, and his dear parental figures Bob and Olive Evans. Freddie was Loved by so many overseas in Scotland who will miss him dearly, Sister-in-Law Linda Morrison, Brother-in-Law David, Sister-in-Law Gwen Morrison, Jordon, and Paul Phillips, Torin, Jessie Phillips, Jake Morrison, and Abbie Keiro and Oaklee Morrison. The Family will miss his great sense of humor and quick wit. The Family would like to thank Sister-in-Law Winnie, Brother-in-Law Mike, Stormy, Michael and Lori for all the help you have given to Freddie. The Family would also like to thank the Staff at Integrated Senior Care, Leslie, who was like a daughter, Mesha, Matt, Melody, Sonia, Peter, and Melissa. Thank you for all your love, care, and friendship throughout. They would also like to thank the staff at St George Regional Hospital. A Celebration of Life will be held on November 3, 2021, at 12:00 noon until 2:00 pm where he will have a military send off, at Serenity Funeral Home at 1316 S 400 E Unit A-5

Freddie David Paul age 74 passed away on October 24, 2021, at St. George Regional Hospital. Freddie was born in Denver Colorado to Neola Patricia Wilde. He married the Love of his life, Rosemary Helen Morrison, on February 3, 1979, at The... View Obituary & Service Information

The family of Freddie David Paul created this Life Tributes page to make it easy to share your memories.

Send flowers to the Paul family.