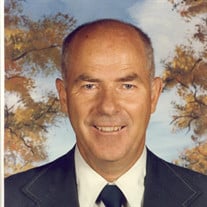 Gilbert Boyd Robinson passed away in his sleep, Friday, January 29, 2021 after a life well lived. He was born in Panguitch, Utah on October 31, 1928 to Gilbert and Erma Robinson. He attended schools in Paragonah, and graduated Parowan High School, before attending Southern Utah University (formerly BAC). He was drafted after the Korean war, and served on the island of Okinawa, and was recognized for good conduct. While in the service, he completed his bachelor’s degree by correspondence through Utah State University. He married his childhood friend, Hazel Jean Davenport, who sent him a Christmas card while serving in the Central States Mission. He told his companion “This is the girl I’m going to marry.” He and Jeannie were married May 24, 1951 in the St. George Temple. They were blessed with a son, Alan (D.Anne) Enoch, UT; and daughters Wendy (Val) Simmons, Providence, UT; Dianna (David) Robinson, Lehi, UT; Holly (Laurin) Ashby, Mesa, AZ; Tammy (Donald) Hulet, Paragonah, UT; Beverly (Dallin) Sawyer, Cedar City, UT; Penny Robinson, Cedar City, UT; and Shelly (Michael) Felix, Hyde Park, UT. He taught Elementary school in Kanab, Paragonah, and Parowan, retiring after 30 years. He served as Bishop of the Paragonah Ward, two different times, served a full time mission with Jeannie to Cape Town South Africa, spending most of their time in Namibia. He served for years as a Patriarch in the Parowan Stake. He was famous for his one line quotes, including: “Sit on the front row and volunteer for everything”, and “Eat up, you may starve tomorrow.” He was known for his work ethic, his thriftiness, and his patriotism, as evidenced by the large map of the United States he created in his yard. He had a deep love, and firm testimony of the Savior. He was proud of his family, and loved to brag about his 41 grandchildren and 103 great-grandchildren. Music was important to him as he played the drums in a dance band with his wife, played the harmonica, and sang with his family. He is preceded in death by his wife, Hazel Jean Robinson, brothers Verdell (Pat), Max, and Sister Lucille (Dee) Conder. He is survived by two sisters-in-law Ruth Ann (Dalton) Robinson, and Margaret (Davenport) Hansen. He lived by this verse in the Book of Mormon: “Do not spend money for that which is of no worth, nor your labor for that which cannot satisfy” (2 Nephi 9:51). A large posterity will continue to honor his name by living a good life, appreciating fresh produce, living frugally, and remembering the sacrifices that bring the blessings he enjoyed. Because of the pandemic, the family will have a private graveside service. In lieu of flowers, be like Dad and share a Book of Mormon. Services are under the direction of Serenity Funeral Home. Family and friends are invited to share condolences online at SerenityStG.com.

Gilbert Boyd Robinson passed away in his sleep, Friday, January 29, 2021 after a life well lived. He was born in Panguitch, Utah on October 31, 1928 to Gilbert and Erma Robinson. He attended schools in Paragonah, and graduated Parowan High... View Obituary & Service Information

The family of G. Boyd Robinson created this Life Tributes page to make it easy to share your memories.

Gilbert Boyd Robinson passed away in his sleep, Friday, January...

Send flowers to the Robinson family.