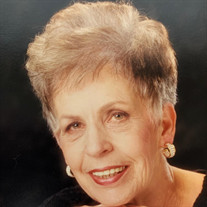 Hurricane, Utah Gail Isom Jones Chamberlain, 83, passed away peacefully on December 28, 2019. She was born on August 28, 1936 to Spencer and Helen Isom in Hurricane, Utah. Gail grew up in Hurricane and graduated from Hurricane High in 1954. After high school, she moved to Mesquite, NV and worked at Faye's Cafe. This is where she met and married Melburn Dale Jones. Dale was in the military and they moved to Fort Sill, OK. They had a son, Kelvin. After Dale died, Gail and Kelvin moved back to Hurricane. Gail married Gary Tod Chamberlain who had three daughters, Vickie, Julie and Paula. Together they had a daughter, Jenifer. They were later divorced. Gail had many different jobs in her life from being a waitress, working at Sears, K Mart and Cross Creek Manor. She loved spending time with family and friend’s deer hunting, canning, picnicking and sightseeing. She was also a member of the Daughters of the Utah Pioneers. Gail is survived by her children; Kelvin (Kimbel) Jones, Hurricane, UT, Vickie (Randy) Darrington, Cedar City, UT, Julie Montgomery, Central, UT, Paula (Brad) Knight, New Harmony, UT, Jenifer (Kenny) Jessop, Hurricane, UT, brother Wallace (Barbara) Isom, Hurricane, UT, many grandchildren and great grandchildren. Gail is preceded in death by her parents; Spencer and Helen, her first husband Dale, her second husband Gary, her brother Ted and her son-in-law Paul. The family would like to thank Hurricane Health and Rehabilitation for their wonderful care over the years. Sun Tree Health and Hospice and Serenity Funeral Home of Southern Utah. A Graveside service will be held on January 6, 2020 at 2:00 pm at Hurricane City Cemetery. Friends and family are invited to share condolences online at www.SerenityStG.com. Arrangements made by Serenity Funeral Home of Southern Utah, 986-9100.

Hurricane, Utah Gail Isom Jones Chamberlain, 83, passed away peacefully on December 28, 2019. She was born on August 28, 1936 to Spencer and Helen Isom in Hurricane, Utah. Gail grew up in Hurricane and graduated from Hurricane High in 1954.... View Obituary & Service Information

The family of Gail Isom Jones Chamberlain created this Life Tributes page to make it easy to share your memories.