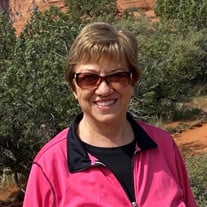 Gail Louise Neumann, 71, passed away on April 7, 2020, near her home. Gail was born on August 2, 1948, in St. Louis, Missouri, to Paul and Ruth Gross. She is survived by her beloved husband of nearly 53 years, Charles Neumann, and their children Steve Neumann and Jennifer Neumann Wilson, and four treasured grandchildren; her sisters Sue Barklage and Patricia Gross, and brothers Paul Gross and Bill Gross, along with their spouses, children, and grandchildren. As the oldest of five, Gail learned how to lead at a young age and long served as a role model to her family members and friends on how to love and serve others. She studied clinical psychology and earned her PhD in 1977, thereafter starting a private practice with two colleagues to serve children and their families. She later combined her knowledge of and passion for child development to direct the curriculum at Rossman School in Creve Coeur, Missouri. Alongside her professional and family life, Gail also devoted significant time throughout the years as a volunteer for organizations dear to her, including as a Stephen Minister, Girl Scout Troop leader, and promoter of gifted education. Gail had a strong sense of adventure, enjoying travels with her husband, children, and grandchildren that were always meticulously planned and intellectually engaging. Later in life, she embraced the beauty of the western United States by moving to Utah in 2004 and exploring local, state, and national parks. She also became a valued member of the Washington County community through her affiliations with New Promise Lutheran Church, Vista School and Foundation, the Kayenta Arts Foundation, and the Assistance League of Southern Utah, where she served as President. Gail had boundless energy, which she used to care for her children, nephews, nieces, grandchildren and friends, making each of them feel heard, special, and loved in his or her own unique way. Her optimism, faith in God, and love of country will remain with those blessed to have known her. Service details will be communicated at a later date, once groups are able to gather again. Following is a link to the families page for service details on her birthday August 2nd. please visit http://gail.neumannfamily.net/ Memorial donations can be directed to the Vista Foundation (http://www.vistautah.com/about-us/vista-school-foundation/) or Assistance League of Southern Utah (http://www.assistanceleague.org/southern-utah/donate/).

Gail Louise Neumann, 71, passed away on April 7, 2020, near her home. Gail was born on August 2, 1948, in St. Louis, Missouri, to Paul and Ruth Gross. She is survived by her beloved husband of nearly 53 years, Charles Neumann, and their children... View Obituary & Service Information

The family of Gail Louise Neumann created this Life Tributes page to make it easy to share your memories.

Send flowers to the Neumann family.