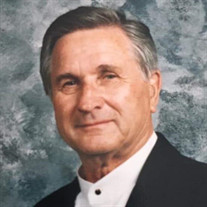 Gary Collett Brimhall, age 91, passed away on April 21, 2019, in St George, Utah. His soul soared heavenward, leaving behind an accepting family: his wife, Monya Barlow Brimhall; his children: Alan (Everline), Greg (Gail), Leslie Pexton, Brian (Chris), Shannon Reynolds (Brian), and Andrea Hale; four step-children: Tonya Leavitt, JoDee Fautin, Cory Fautin, and Wade Fautin; eighteen grandchildren; and twenty-one great-grandchildren. He was preceded in death by: his parents: Jesse Temple Brimhall and Veda Collett Brimhall; his previous wife Diane Thain (divorced); and seven brothers and sisters. Gary’s adventures in life involved him in the excavating business which included Glen Canyon Dam, road work in New Mexico, and leveling farmland from Utah to Kansas. He also was involved in patented inventing in the oil industry, and also worked as television director. In his life, coworkers and friends were very important and much appreciated to him. Along the way, he was enriched by hundreds of wonderful and inspirational people he knew. Because of these friendships, Gary has a host to welcome him in his step to eternal life. The most rewarding aspect of his life was his membership in the Church of Jesus Christ of Latter-day Saints. There he served in many positions including his love of being a ward choir director. Gary loved singing, and enjoyed visiting senior homes where he sang songs of the Big Band era and Broadway. With great respect and love, his family honors him and his life of service. A celebration of life will be held on Saturday, May 4, 2019, at the Church of Jesus Christ of Latter-day Saints Chapel in Hurricane, located at 100 West 300 South, Hurricane Utah. A visitation will be held at 10 a.m. with a service to follow at 11 a.m. A special thanks to Dr. Walter Ogden, Integrated Hospice Care, and the Season’s nursing staff. In lieu of flowers, the family requests donations be made to diabetes and cancer foundations, or American Foundation for the Blind.

The family of Gary Collett Brimhall created this Life Tributes page to make it easy to share your memories.

Send flowers to the Brimhall family.