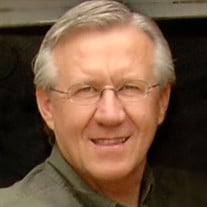 Gary Lyman Howe, of Enoch, Utah, passed away quietly at home on Friday, January 18, 2019, at the age of 66. Gary was born on February 6th, 1952 to Lorena Jean Duke and Lenard Roland Howe in American Fork, Utah, and raised in Centerville, Utah in a loving and engaged family. After serving a mission for the Church of Jesus Christ of Latter-day Saints in the Alberta-Saskatchewan Mission, he met Caroline Nelson in a folk dance class while attending Brigham Young University. The two were married on Friday, May 9th, 1975 in the Salt Lake City, Utah Temple. Gary graduated from BYU with a degree in Ornamental Horticulture, and would later earn a Business Degree from Southern Utah State College (now SUU). With their ever-growing family, Gary and Caroline lived in various places, including Sandy, Utah; Portland, Oregon; Saint Joseph, Missouri; and finally settled on the Nelson family farm in Iron County, Utah, where they raised seven children. To enable his family to stay on the farm, where his children would receive a practical education in the value of honest work alongside their parents, grandparents, aunts, uncles, and cousins, Gary worked a variety of jobs throughout his career, sacrificing some of his earlier business ambitions. He sometimes joked that he worked to support Caroline’s farming habit, but he, too, was central to the farm operation, milking cows, tending fields and animals, and repairing and improving things. Whatever he did, professionally or otherwise, the people he worked with respected him for his genuine kindness and sharp skills. He possessed a practical creativity that manifested itself in clever solutions to everyday problems. He was always searching for better ways to do things, and was happy to share anything he had learned. He led a family- and service-oriented life and participated frequently in his children’s educational activities. He joined many trips with the math and science clubs to competitions across the state and country. His love of dance surfaced frequently, and he became famous on school trips for getting all the kids off the bus at rest stops to do pliés in the parking lot. The idea that ballet should be practiced a on science trip, or local flora discussed on a family vacation, was natural to Gary, whose interests and expertise were broad. He actively participated in community service and made many friends working with area organizations. He was a frequent volunteer at the Utah Shakespeare Festival and served as president of the Friends of the Iron Mission, a community support organization for the Frontier Homestead State Park Museum, during the park’s process of choosing a new name. Besides museum events, he was involved with such diverse causes as the Tour of Utah, the Cedar Livestock and Heritage Festival, the Iron County Quilters Guild, and others. Gary gave faithful Church service throughout his life and, through his example, impressed his practical testimony firmly upon his children, grandchildren, and many others. He held a number of Church callings and served as the Bishop of the Garden Park Ward until his death. He was preceded in death by his parents and brothers Kent and Mark. He is survived by his wife Caroline and their seven children, Peter (Candice) of Enoch; Amy of Enoch; Jacob (Nancy) of San Diego, CA; Adam (Leanna) of Sandy, UT; James Pruett (Caroline) of Pleasant Grove, UT; Benjamin (Ashley) of Herriman, UT; and Gary Joseph (Britannia) of Cedar City, UT, his siblings Stephen (Terrie) of Cottage Grove, WI; Denis (Terri) of Scottsdale, AZ; and RoJeanne Smith (Doug) of Bountiful, UT. Gary and Caroline have 25 grandchildren. A viewing will be held at the Enoch Wards Building, 451 East Midvalley Rd, Enoch, Utah on February 1 from 6 to 8 p.m., and February 2 from 9 to 10:45 a.m. with funeral services to follow at 11 a.m. The family wishes to thank Gary and Caroline’s ward family for their constant support, the caring staff at the Intermountain Cancer Center in Cedar City, and Ethan of Sun Tree Home Health and Hospice. In lieu of flowers, the family suggests a donation to a humanitarian fund.

Gary Lyman Howe, of Enoch, Utah, passed away quietly at home on Friday, January 18, 2019, at the age of 66. Gary was born on February 6th, 1952 to Lorena Jean Duke and Lenard Roland Howe in American Fork, Utah, and raised in Centerville, Utah... View Obituary & Service Information

The family of Gary Lyman Howe created this Life Tributes page to make it easy to share your memories.

Send flowers to the Howe family.