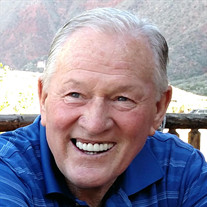 Gary Duane Nyborg, age 75, returned to his Heavenly Father on Aug. 21, 2018. He passed away at his home in Washington Fields, Utah. He was born November 30, 1942, in Kingman, Arizona to Edna Black and Alfonso Hansen Nyborg. Gary married Brenda Kleinman on Aug. 31, 1963, in Toquerville, Utah. The marriage was later solemnized in the LDS St. George Temple on July 16, 1966. They were married for almost 55 years. Gary grew up in southern Utah and northern Arizona where he learned the value of hard work and found his love for the outdoors and hunting. He spent most of his youth in the remote mountains of southern Utah riding his horse in the company of his trusted dog. He graduated from Fredonia High School where he played on both the basketball and football teams. He was named most outstanding athlete his junior year of high school. Gary worked 40 years at Titanium Metals and ranched 5 years on the Arizona Strip. Gary was larger than life and he touched the lives of many with his outgoing personality, kindness, generosity and his sense of humor. Gary and Brenda have three children. Gary loved being a father and a grandfather He had eight grandchildren and loved to go to all of their sporting events. He knew football and basketball but soon learned soccer and volleyball too. Gary was a devoted member of the LDS church and held many positions. Later in life he served two service missions with his eternal partner Brenda which gave him great joy. Gary was was preceded in death by his parents Alfonso Hansen Nyborg and Edna Black Nyborg; his brother Darwin Lloyd Nyborg; and sisters Vonda Jean Nyborg and Teresa Nyborg. He is survived by his wife Brenda; children Lezlee (Andrew) Jones, Chad (Saleen) Nyborg and Lance (Holly) Nyborg; and sisters Elaine Gubler and Sherrie Louise Webb. And his eight grandchildren. Funeral services will be held Monday, Aug. 27, at 11 a.m., at the Washington Fields LDS chapel, 115 West 2000 South, Washington, Utah. A viewing will be held that morning from 9:00-10:45 a.m. at the church. Interment will be in the Toquerville City Cemetery. Friends and family are invited to share condolences online at www.SerenityStG.com. Arrangements and memorial tree planting by Serenity Funeral Home, 986-2085. The family would like to extend their appreciation and love to Dr. John Reis and their special angel Nurse Leslie Banks.

Gary Duane Nyborg, age 75, returned to his Heavenly Father on Aug. 21, 2018. He passed away at his home in Washington Fields, Utah. He was born November 30, 1942, in Kingman, Arizona to Edna Black and Alfonso Hansen Nyborg. Gary married Brenda... View Obituary & Service Information

The family of Gary Duane Nyborg created this Life Tributes page to make it easy to share your memories.

Gary Duane Nyborg, age 75, returned to his Heavenly Father on...

Send flowers to the Nyborg family.