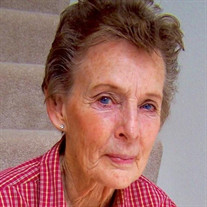 Geraldine (Gerry) Rodriguez, age 90, died peacefully on July 22, 2021, at home in Cedar City, Utah. Gerry was born to Ernest and Esther Himmelman on December 21, 1930 in Los Angeles, California. Known for its clean air during the 1930’s and 40’s, Gerry’s parents moved to Sunland-Tujunga, a small-town within the San Fernando Valley at the base of the Verdugo Mountains and the San Gabriel Mountains north of Los Angeles. She attended Pinewood Elementary School and graduated from Verdugo Hills High School in 1949. After a five-year courtship, Gerry married the love of her life Louis (Lou) Rodriguez in 1954. They lived in Sunland and raised their two children near family and friends, living there for over 30 years. Soon after retiring, Lou and Gerry moved to Orem, Utah in 1989. While living there they settled into their neighborhood quickly, making lifelong friends whose Christlike examples led them to joining the Church of Jesus Christ of Latter-day Saints. They were later sealed to each other and their family for time and eternity in the Las Vegas, Nevada Temple in 1994. Gerry was a professional seamstress. She worked at a motorcycle seat company for 18 years sewing custom seat covers for choppers. Her work was shipped all over the world, including the company’s biggest client in Stockholm Sweden. During her employment there, she would often share her own wisdom and common sense with many of the employees. They often approached her with their own challenges knowing that she would respond in a direct, but caring and gentle way. She also taught sewing classes in her home, and made custom wedding dresses. The ladies and teens that attended her sewing classes enjoyed her laid back teaching style that made it fun to create beautiful clothes. Her memorable virtues were patience and kindness. She always put others before her own needs and that included her family, extended family members, neighbors and friends. Gerry also loved dogs, cooking and baking, musicals, camping in the mountains, fishing, cutting firewood and spending time with her sweetheart. Gerry is survived by her husband, Lou Rodriguez of Cedar City, Utah; daughter, Linda Skinner (Brett) of Hurricane, Utah; son, Ron Rodriguez (Stephanie) of Cedar City, Utah; grandchildren, Craig Rodriguez (Dani) of Post Falls, Idaho; Brent Rodriguez of Cedar City, Utah; and Lyndsay Rodriguez of Gillette, Wyoming; 6 great-grandchildren; and a number of brothers and sisters-in law, nieces, and nephews. Gerry is preceded in death by her parents, Ernest H. Himmelman and Esther L. Anderson Himmelman; and brother, Ernest Himmelman of Medford Oregon. There will be a private graveside service for immediate family members at the Cedar City Cemetery. The family wishes to thank, their family physician and friend, Dr. Mori Speakman, Iron County Home Health, and Ethan Bunker, Sun Tree Home Health and Hospice.

The family of Geraldine (Gerry) Leona Rodriguez created this Life Tributes page to make it easy to share your memories.

Send flowers to the Rodriguez family.