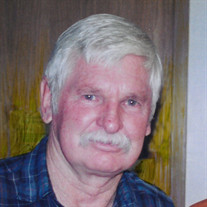 St. George, Utah - Glen E. Martin, 82, passed away on November 3, 2019 in St. George, Utah. He was born June 7, 1937 in Monticello, Utah to Graydon and Edna (Dolly) Martin. He married Violate Partner in 1957 in St. George, Utah. They later divorced. He married Debbie Lewis in 2010. Glen was raised in Monticello, then moved to St. George where he met Violate at the U&I Sugar beet factory. Violate had also just moved to St. George from Henrieville, Utah. Glen loved science and nature, mostly geology and archaeology. He was unusually brilliant at times which made him quirky and eccentric. He was an avid photographer and enjoyed art with Debbie, who was also an artist. He enjoyed exhibiting his photography in local galleries, attending art shows and being a part of the St. George art community. He is survived by children: Alan Martin (Cammie), Bruce Martin (Linda), Trina Condie (Bryon), Anna Oakden (David) and his beloved grandchildren and great grandchildren. Also his brother, Gary Martin (Binnie); sister, Claudia Ketron (Dave); sister, Patti Wingeier. He was preceded in death by his parents; his infant son, Dennis Herschel Martin; his wife Debbie and her son Steven. Also, his sisters Marlene, Elaine and Linda who he loved dearly. The family would like to thank the staff from Critical Nursing Services and Canyon Home Health and Hospice for their kind and loving care. A family graveside service will be held at 3:00 PM, November 9, 2019 at the Monticello cemetery. A celebration of Glen's life will be held at a later date in St. George, UT. Family and friends are invited to share tributes online at www.serenitystg.com. Arrangements by Serenity Funeral Home of Southern Utah, 986-9100.

The family of Glen E Martin created this Life Tributes page to make it easy to share your memories.

Send flowers to the Martin family.