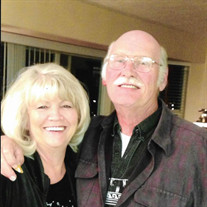 Glenn Todd Allison died in his home in Santa Clara, Utah, surrounded by his family on November 25, 2020. He fought a courageous battle against bone and lung cancer. He will be missed. At his request, and in keeping with a tradition started by his father and mother, his remains will be given to the University Of Utah School Of Medicine. At some later date, Todd’s ashes will be interred at a Veterans Cemetery. Glenn Todd Allison was born on September 22, 1945 in Minneapolis, Hennepin County, Minnesota, the son of Alan Irving (Mike) and Bettie Jayne Christian Allison. Todd was the oldest of the four Allison children, and grew up in Plymouth, Minnesota, a suburb of Minneapolis. In 1963, Todd graduated from Wayzata High School, and soon after joined the Navy. Todd was trained as a Corpsman at Great Lakes Naval Base, and spent most of his enlistment in Formosa. For the three years after his Honorable Discharge in 1967, Todd attended college in River Falls, Wisconsin. 1970 found Todd in California where on September 3, 1970, he married Shara Lynn Dutton in Yuba City, Sutter County, California. Todd adopted Shara’s son Troy and on March 9, 1972, Shara gave birth to the couple’s only other son, Cory Alan. The marriage ended in 1976 and Todd made his way back to Minnesota where he worked for Carlson Company’s Hotel Division. While working in Minnesota, Todd met and on February 14, 1981, married Cheri Lynn Downs in Elk River, Sherburne County, Minnesota. Not long after the marriage, the couple moved to Montana where Todd worked at various jobs and attended the University of Montana. At the young age of 50, Todd graduated with a degree in Marine Biology and started his work with The US Department of Agriculture as a Fish Biologist. The job started in Montana, but took Todd to Wyoming, California and finally Arizona. While living and working in Wyoming, on October 15, 2005, Cheri lost her battle with cancer. Todd stayed in Arizona after retirement and sometime in June of 2012, Todd met Marjorie Faye Moffett Gilbert. Todd and Marge married on February 7, 2014 in St George, Washington County, Utah. The couple settled in Santa Clara, Utah. Todd and Marge had a great but short life together. They shared a love for one another that was truly unique. They golfed and traveled together, but mostly they enjoyed spending time with their many friends and family in the area. In January of this year, both Todd and Marge were diagnosed with different types of cancer and each were told they have about a year before the disease would take them. Both fought with all they had in them, but on August 11th of this year, Marge lost her battle with brain cancer, and now Todd has lost his battle with bone cancer. Todd was preceded in death by his parents, second wife Cheri, and third wife Marge. Left behind to grieve his passing are his sons, grandsons Kelric and Kyle, great-granddaughter Lilliana Persia Mary, brother Marc (Clara) of California, sisters Linda (Ed Neubauer) of Texas and Connie (Terry Bedin) of Minnesota. Todd would not have been able to spend his last weeks in his home had it not been for his extended family. His chosen family. Brent and Kathy Stanley. Kathy is Marge’s sister and Brent was Todd’s BFF. Bert and Traci Gilbert along with their son Corbin did so much to keep Todd at home. They cared deeply for him and provided for his basic needs and comfort. They also, along with his many other friends, are left to mourn. What you have just read is Todd’s obituary. The OED defines obituary as: A notice of a death, especially in a newspaper, typically including a brief biography of the deceased person. The obituary does not tell the whole story of Todd’s life. His love of nature, hunting, fishing, horseback riding, and the joy he got out of riding his Gold Wing. It does not tell you about his many talents like woodworking, leathercraft and welding. It also does not tell you about how much joy he got out of having a cocktail on his back porch with family and friends. The stories of Todd’s life will be told over and over by the friends and family who were there when they happened. Todd Allison was a great guy, unique, one of a kind and his memory, his legacy, will live on for a very long time. Todd Allison will be missed. Memorials are a great way to help keep the legacy of Todd and Marge alive. The family would recommend a gift to honor them be made to the charity of your choice. The care and compassion Todd received from RN and Case Manager Christy Warner, Ivy Tolman and CNA Trinity Humphreys from Sun Tree Hospice was extraordinary. The family is very grateful.

Glenn Todd Allison died in his home in Santa Clara, Utah, surrounded by his family on November 25, 2020. He fought a courageous battle against bone and lung cancer. He will be missed. At his request, and in keeping with a tradition... View Obituary & Service Information

The family of Glenn Todd Allison created this Life Tributes page to make it easy to share your memories.

Send flowers to the Allison family.