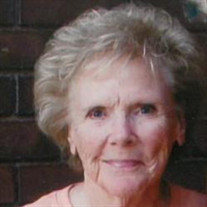 Glennice LaVonne Brewer “Chris” passed away at her home, Wednesday, April 29, 2020 at the age of 90. Chris was born June 15, 1929 in SLC, UT to Alma and Murrelyn Christensen (of Holladay, UT.) She married Roy Allen Brewer on Jan. 24, 1948 and was later sealed in the Salt Lake LDS Temple. Chris was raised in Holladay, along with her two brothers Willis and Raymond. She was valedictorian for her 9th grade class and graduated from Granite High School in 1947, also as her class valedictorian. She resided in Holladay with her husband for almost 35 years, but it was the Southern Utah red rocks and scenic views that led them to retire in Leeds, UT for the past 35 years. During the summer, from the age of 12 through 15, she taught 40 students (neighbors and cousins) tap and ballet lessons in a studio at home that her father built. She charged 10 cents per hour for each student she taught. At age 16, she continued teaching dance to students at the old Deseret Gym in downtown Salt Lake. Besides her love of dance, Chris worked many positions in customer service. Her greatest accomplishment however, was her employment as Western Regional Director of Training for Weight Watchers International, Inc. She started as a lecturer for the first 3 years with the local W.W. franchise in Utah, lecturing many classes in Salt Lake, Granger, Bountiful and Logan. When the founder Jean Nidetch came to visit the Utah franchise, Chris was assigned to work closely with Jean as her Public Relations Rep. Jean was so impressed with the work that Chris had accomplished, that she personally invited her to join the International team. With that, her responsibilities included evaluation of lectures, training staff, writing behavior modification manuals and modules for use in the program. Her many hobbies and interests included bowling, golf, riding her ATV all over Southern Utah, Nevada and Arizona. She enjoyed camping, boating with family and friends not only at Lake Powell, but also on the Friendship Cruise-up the Green and down the Colorado rivers. She was a certified scuba diver and received her private pilot’s license from Alta Air Park in 1966. You name it, she did it! Chris had many church callings and served as Relief Society counselor and Social Relations teacher. She served for a time on the Stake Sunday School Board. From the age of 19, Chris was called as the Holladay Stake Dance Director and taught ballroom dance for 18 years in that position. As Dance Director, she was involved in many Ward and Stake programs, touching the lives of many that will never forget what a talented dancer and choreographer she was, even teaching Ward children, teens and adults until the age of 79. Chris and her husband served an LDS mission to the California San Jose area. They were crucial in assisting the Red Cross during the 1989 San Francisco-Oakland earthquake. Many times, Chris was quoted as saying, “Our mission was the BEST period of my life.” She is survived by her daughter Carolyn (Jeffrey) Player of WVC, UT and Kelly (Diane) Brewer of Leeds, UT., 8 grandchildren, 8 great-grandchildren and 2 great great-grandchildren. Chris was preceded in death by her husband Roy and a son Kevin (Bonnie) Brewer. The family would like to thank the Encompass Health and Hospice nurses, aides, social worker and chaplain for the loving care they showed our Mother and Grandmother during her last days. Special thanks to Josi, Carla, Tammy, Amanda and Janice- We love you. Per her request there will be no funeral service. A graveside service for the family and friends will be held at a later date to be determined. For more information, please contact Carolyn or Kelly. Interment will be at the Elysian Burial Garden in Murray, Utah.

The family of Glennice "Chris" LaVon Brewer created this Life Tributes page to make it easy to share your memories.

Glennice LaVonne Brewer “Chris” passed away at her home, Wednesday,...

Send flowers to the Brewer family.