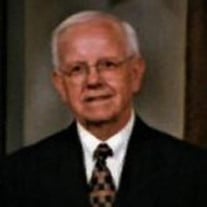 Grant DeLoss Williams returned to his Father in Heaven the morning of October 30, 2020. He was born March 9, 1939, in Milford, Utah, to Lloyd and Della Williams. He married his sweetheart Sally Rae Hauser December 14, 1962, and they were sealed in the Manti Utah Temple. Grant graduated with a Bachelors degree from USU and a Masters from BYU. He enjoyed his career teaching the gospel as a seminary teacher for 37 years in Utah, Idaho, and Tonga. His children considered themselves to be seminary brats because they moved every three years until they settled in Kaysville, Utah in 1982. As a young man, he served a full-time mission in the Western States Mission. Later, he and Sally served four missions together: Hawaii Hilo Mission where he worked with Young Single Adults and served in the Kona Hawaii Temple as a Sealer; Salt Lake Service Mission working with local youth and young adults to help them attend technical school; New Hampshire Manchester Mission where he served as the Director of the Joseph Smith Birthplace Memorial Visitors Center at the time of Joseph Smith’s 200th birthday celebration; and the Washington D.C. Temple Mission where he served as a assistant recorder. He was always pleased that his sons and so many of his grandchildren followed his and Sally’s example to serve full-time missions throughout the world. He served in many callings in the Church throughout his life including Bishop of the Filer Idaho 2nd Ward. He worked many years at the Bountiful Temple where he served as a Sealer until the temple was closed due to Covid-19. He was able to perform the temple marriage ceremonies for 11 of his grandchildren and had many fond memories serving the Lord in the temple. Grant is survived by his wife Sally, his siblings—Florence Peterson, Doug (Sandra) Williams, Dorothy Sperry, Beverly (Robert) Painter; his children--Richard (Carrie) Williams-Sandy, UT; Julie (Karl) Searle-Roosevelt, UT; Janniece (Gary) Brogan-Montpelier, ID; Jackie (Paul) Nielson-Fruit Heights, UT; Curtis (Camilla) Williams-Kaysville, UT; Jolyn (Travis) Wyatt-Pocatello, ID; 29 grandchildren; and 10 great-grandchildren. He is preceded in death by his parents, siblings Kenneth (Margaret) Williams, Lorene (Dennis) Johnson, Shirley (Dee) Bradfield, Elwin & Helen Williams (infant twins), Brothers-in-law Sherman Peterson, Phil Sperry, and a son-in-law Brandon Paulsen.

Grant DeLoss Williams returned to his Father in Heaven the morning of October 30, 2020. He was born March 9, 1939, in Milford, Utah, to Lloyd and Della Williams. He married his sweetheart Sally Rae Hauser December 14, 1962, and they were sealed... View Obituary & Service Information

The family of Grant DeLoss Williams created this Life Tributes page to make it easy to share your memories.

Grant DeLoss Williams returned to his Father in Heaven the morning...

Send flowers to the Williams family.