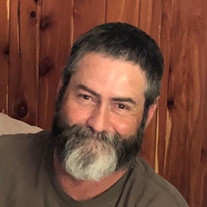 Gregory Leon Bowler of Payson, UT passed away on August 6, 2020 with the love of his life holding his hand. Greg was born on June 21, 1975 to Roland and Margaret Bowler in Cedar City, UT. He was born with Spina Bifida, which led to his life of 60 plus surgeries. Doctors told us he would never walk, but we spent many hours walking him up and down the halls in our home. He did walk, but with a limp. He never gave up and always wanted to do what everyone else was doing. He was such a great example of perseverance to us all. He went to Enterprise Elementary and then Enterprise High School where his dream of being a cowboy in the rodeos came true. He was a member of the EHS Rodeo Club where he team roped. He graduated from EHS and then attended SUU. He decided to serve a mission for the Church of Jesus Christ of Latter Day Saints and served in Des Moines, Iowa. He had many different jobs as he was in and out of hospitals throughout his life. It didn’t matter the difficulties he had, he always had a smile on his face and always made friends wherever he was. Everyone loved him and he loved them. He was a bright light for his friends and family. He adored all of his nieces and nephews and always kept track of what they where doing. He loved them so much and they will miss their Uncle Gorilla with the Greg tape. He never let his handicap keep him from doing what he wanted and we always encouraged him to try anything. The only thing he could not do was ride a bull, but that didn’t keep him from trying a time or two and getting hurt. Being a bull rider was always his dream. Greg also loved riding his motorcycles. Two years ago, Greg found the love of his life Jennifer Dean. They, with her five kids made a beautiful life together. The three younger kids adored him and called him Dad. He was Mr. Mom and finally felt like he had a purpose in this life. He was the happiest he had ever been. Jennifer says he us running faster than the angles now. He us survived by the love of his life, Jennifer Elizabeth Dean and their children, Jonathan Wesley Smith, Breana Nicole Smith, Andrew McCellen Dean, Matthew Ray Dean, and Lily Anne Dean, all of Payson, UT. His father and step-mom, Roland Leon and Mary Bowler, step-father, Fredric Rolland Ybright. His brothers, Collin (LeeAnn) Bowler, Lindsey (Natalie) Bowler, and his sister, Emily (Ty) Anzalone, and his many nieces and nephews. He was preceded in death by his dear mother, Margaret Day Bowler Ybright, his grandparents, his Uncle Curtis Day and cousin Garrett Slack There will be a viewing on August 10th, 2020 from 10:30-11:00 a.m. followed by the graveside service and internment at the Enterprise City Cemetery. Funeral services are provided by Serenity Funeral Home.

Gregory Leon Bowler of Payson, UT passed away on August 6, 2020 with the love of his life holding his hand. Greg was born on June 21, 1975 to Roland and Margaret Bowler in Cedar City, UT. He was born with Spina Bifida, which led to his life... View Obituary & Service Information

The family of Gregory Leon Bowler created this Life Tributes page to make it easy to share your memories.

Send flowers to the Bowler family.