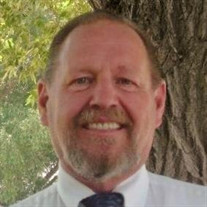 St George, Utah – Gregory Paul Sharp left this earthly life and returned to his Heavenly Father on March 12, 2019, in St George Utah. He was born on June 5, 1954, in Bountiful, Utah to Ralph Leon Sharp and Betty Louise Jex. Gregg married his sweetheart Linda Jane Werner on November 30, 1979, in the Salt Lake City Utah Temple. Gregg was raised in Bountiful, Utah where he lived with his parents, five brothers, and two sisters who he loved with all his heart. He graduated from Bountiful High School and went on to continue his education later in life at Dixie State College. He owned and operated Doug’s Donuts which was his passion, from there he went on to work for Morgan Termite and Pest Control where he continued working until he retired. He fulfilled a mission for the Church of Jesus Christ of Latter Day Saints in Cordoba, Argentina. Gregg loved his family so much, his grandchildren were his pride and joy and he would have done anything for them. Gregg is survived by: his wife, Linda; his children: Nichelle (Jeremy) Sharp of Lehi, Utah, Gavin sharp of St George, UT, and Adam (Trisha) Sharp also of St George, UT; nine grandchildren: Grant, Zoey, Abigail, Madison, Hunter, Xzaviar, Tennley, Titan and Eternity; his sisters: Peggy (Byron) Tolman of Jensen, UT, Paulene (Lynn) Merrell of Roosevelt, UT; his brothers: Lee (Marilyn) Sharp of Vernal, UT, Dennis (Kathy) Sharp of Tridel, UT, and Kenny Sharp of Jensen, UT; and his sisters-in-law: Janice sharp of Jensen, UT, and Kaye Sharp of Evanston, WY. He is preceded in death by his parents: Ralph Leon and Betty Louise; two brothers: Randy and Scott; his father-in-law: Dick Werner; and two brothers-in-law: Randy Werner and Grady Barnhardt. Viewings will be held Friday, March 15 from 6 to 8 p.m. and Saturday, March 16 from 1 to 1:45 p.m. located at the Church of Jesus Christ of Latter-day Saints Chapel at 1610 North Dixie Downs Road, in St George, UT. A celebration of life will follow the viewing on Saturday, March 16 at 2 p.m. at the same location. Interment will be held Monday, March 18 at the Jensen Cemetery in Jensen, UT. We would like to give a big thanks to the Snow Canyon 13th Ward for all the love and compassion they have given to all of us and gave to Gregg.

The family of Gregory Paul Sharp created this Life Tributes page to make it easy to share your memories.

Send flowers to the Sharp family.