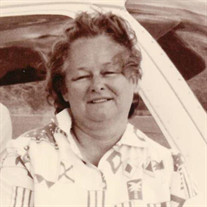 Harriett Rose Powell was born on the front porch of her Nogales, New Mexico home because it was just too hot inside the house. She got her middle name from the pink roses blooming just inches away, and her lifelong love of flowers from her dad, who planted roses everywhere. She spotted her future husband when she was at a church dance with her mother. Brownie Monnett was nine years older, played steel guitar in the band, and could dance circles around her. Harriett proposed because it was a leap year, and her mother fudged her age on the marriage certificate. A year later, she became a mother just shy of her sixteenth birthday. Harriett and Brownie moved to La Verkin in 1968 with their four boys: Glen, Vern, Wayne, and Harlan. They raised cows, pigs, chickens, and one obnoxious peacock that the boys roasted for dinner when Harriett was out doing the wash. Fearless, independent, and competent, Harriett could grow, bottle, and cook up the most delicious food in the county; defend her babies against rattlesnakes; cook on a wood stove; stretch her dimes and invest her dollars; give birth, breech, without any help at all; hold her own for weeks while her husband traveled for work; and clobber her teenage boys when they needed it. At age 38, Harriett found her true calling when she became a grandmother. She drove and flew tens of thousands of miles on trips with her grandkids, enduring sulky teenagers and stinky shoes for the pleasure of sharing her favorite places with them in every one of the fifty states she and Brownie visited. And when they came to her house, each one of them found she remembered what foods they liked. She made sure there were always caramels in the candy jar for her favorite granddaughter. Harriett loved George Strait, butterflies, Coke with a bendy straw, lighthouses, hummingbirds, pretty rocks, dancing in the kitchen, tree-ripened fruit, wild animals, gourmet cooking, yard sales, fishing, good books, and roses. Harriett’s wandering feet didn’t love the wheelchair, and we know she’ll love the next life even more than this one. She has long looked forward to rejoining her son Wayne, who preceded her in death by 36 years. Her 14 grandchildren and 37 great-grandchildren will never forget her love. We will celebrate her life on Monday, May 3, 2021 at the Church of Jesus Christ of Latter-day Saints at 70 South 300 West, La Verkin. The viewing will be from 9:00 to 10:45 AM, and the funeral will take place at 11:00 AM. The interment will follow at the La Verkin Cemetery.

Harriett Rose Powell was born on the front porch of her Nogales, New Mexico home because it was just too hot inside the house. She got her middle name from the pink roses blooming just inches away, and her lifelong love of flowers from her dad,... View Obituary & Service Information

The family of Harriett Rose Monnett created this Life Tributes page to make it easy to share your memories.

Harriett Rose Powell was born on the front porch of her Nogales,...

Send flowers to the Monnett family.