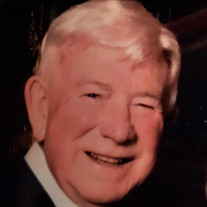 Harry Brim Gambles after living a full life of nearly 93 years passed away on the morning of September 10, 2021 in Blackfoot, Idaho. Harry entered this life during a severe blizzard that prevented the local physician from attending his late-night birth. He was born on his father’s homestead and shared a two-room home without central heat, electricity or plumbing. After playing basketball for and graduating from West Side High School in Clifton, Idaho he enrolled in college at Brigham Young University. In 1950, during the Korean War, he was inducted into the U.S. Army. He was stationed in Europe where he assisted in rebuilding Germany after WWII. Harry was honorably discharged in 1953 and immediately responded to a call to serve a 3-year mission to the Japanese Islands. In 1958, the evening of his graduation from BYU, he proposed to Hazel Tolman. They have 4 children, 14 grandchildren and 12 great grandchildren who, with love and admiration, all call him “Papa.” Harry loved his career in agriculture finance. He had the heart of a farmer and loved the land and its people. Harry had a profound love for Jesus Christ and served him in many capacities. After an interview with the apostle Gordan B Hinkley he was called to serve as a Bishop to the Preston, Oneida Stake 3rd ward. He joyfully served in multiple callings over the years in his ward and stake. After raising their children, Harry and Hazel were called to serve a mission at the LDS temple in Frankfurt Germany where Harry learned his second foreign language. After returning from this mission Harry and Hazel enter a joyful period of companionship marked by daily service in the LDS Temples, local volunteering and travel. Harry is survived by his wife of 63 years, Hazel Gambles and his children and their spouses; Debra and Brian Beard; David and Julie, Darin and Jalene, and Dallin and Cauleen Gambles. He is survived by his sisters Barbara Luke and Lois Hess. He was preceded in death by his four brothers: Theron, Milton, Phil and Paul Gambles. He recently lost his younger sister Marilyn Child. He was also preceded in death by his mother, Thelma Brim who passed away while Harry was serving a mission in Japan and his father in 1974. The family would like to thank the staff at The Gables for filling our father’s last days with activity, belonging and Joy. Funeral service for Harry will be held September 25, 2021. Viewing will be held at 9:30 am, the funeral service will be at 10:30 am at the East Stake Center, 1289 Mt. Putnam Drive, Blackfoot, Idaho. Harry will be interred at a graveside service in Swan Lake, Idaho on a hill overlooking the homestead where his life began.

Harry Brim Gambles after living a full life of nearly 93 years passed away on the morning of September 10, 2021 in Blackfoot, Idaho. Harry entered this life during a severe blizzard that prevented the local physician from attending his late-night... View Obituary & Service Information

The family of Harry Brim Gambles created this Life Tributes page to make it easy to share your memories.

Send flowers to the Gambles family.