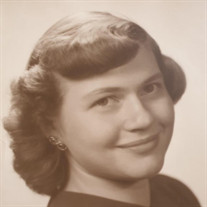 Helen Louise Knott Beecher passed from this life peacefully in her sleep early in the morning of August 2, 2021, a few weeks after her 90th birthday. She was preceded in death by her husband, Duane Edward Beecher and three of her sons, Glen Worthington Beecher, David Mark Beecher, and Michael James Beecher. She is survived by six of her children, Douglas Paul Beecher, Sr. (Willyne), John Bradford Beecher (Peggy), Thomas Lyman Beecher (LaRee), Margaret Ann Beecher, Matthew Edward Beecher (Susan), and Stephen Lawrence Beecher (Marnie), as well as 21 grandchildren and a growing number of great grandchildren. Helen Louise was born June 21, 1931, in Council Bluffs, Iowa, to Emelia Victoria Danielsen Knott, widow of Clyde Henry Knott who tragically died in an industrial accident in December 1930. She had one brother, Richard Albert Knott (Dorthelia), who preceded her in death. Helen Louise and Richard were raised by an extended family under one roof, including her widowed grandfather, Rasmus Marius Danielsen, aunt Iowa Catherine Danielsen Marriott, and Iowa's daughter, Maxine Marriott Peterson Hollis, in addition to her mother Emelia. Her grandmother, Emily Sofia Johnson Danielsen, had previously died of the Spanish flu in the 1918 epidemic. In 1940, Helen Louise moved to Ogden, Utah with her extended family when her mother earned an elementary school teacher's credential and accepted a teaching position in Ogden. She continued her education there, graduating from Ogden High School in 1949 and then enrolling at Weber College, where she met her future husband Duane in a square dancing class. She graduated from Weber in 1951 and then began work at Del Monte Foods. Helen Louise married Duane on December 17, 1951 in the Manti, Utah temple of the Church of Jesus Christ of Latter-day Saints. They made their first home in Salt Lake City, where Duane had transferred to the University of Utah. After his graduation in 1952, they moved to Los Angeles, California. All of their children were born in nearby Santa Monica. She found joy in her children, church, friends, and family picnics all over southern California in those years. She loved preparing large quantities of potato salad, baked beans, oatmeal raisin cookies, and lemonade to go with the sandwiches she packed for these outings. But she always had a longing to return to Utah and have her family see grandparents, aunts, uncles, and cousins more often. In 1974 she and the family moved to Hurricane, Utah, where she continued to enjoy her children, church, and friends for many years. After her children started families of their own, she looked forward to their visits. The past few years as her health declined, she would still smile at the sound of a familiar voice. Many heartfelt thanks to our sister Margaret for giving Helen Louise loving daily care the past five years, to all the family, home health workers, ministering sisters, brothers, and many others who helped her so much. All of us miss her, but we know she is enjoying a grand reunion with many loved ones and is thankful to no longer struggle to breathe. We love you, Mother, and will think of you until we meet again. A viewing will be held Friday, August 6, 2021 from 10-11:30 a.m. at the Heritage Chapel, 1178 S. 700 W. Hurricane, Utah.

Helen Louise Knott Beecher passed from this life peacefully in her sleep early in the morning of August 2, 2021, a few weeks after her 90th birthday. She was preceded in death by her husband, Duane Edward Beecher and three of her sons, Glen... View Obituary & Service Information

The family of Helen Louise Knott Beecher created this Life Tributes page to make it easy to share your memories.

Helen Louise Knott Beecher passed from this life peacefully in...

Send flowers to the Beecher family.