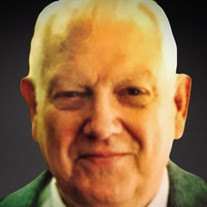 Henry “Pete” Paul Potter, Jr., passed away on April 6, 2021, at home. He was born January 6, 1930 in Vandalia, Missouri to Henry Paul Potter, Sr. and Ethel Campbell. He was married to Jean Roll who passed away after 29 years of marriage. Pete later married Cherryl Ann Winn on June 22, 1983 in Aztec, New Mexico. Called Hank as a boy, he was raised 3 miles out of Vandalia, MO on a sharecroppers farm during the hard years of the depression. He and his sister, Emily, walked to town each Monday for school and didn’t return to the farm until Friday evenings. He served in the US Navy from 1948-1953 as part of the occupying forces in Japan and on a minesweeper during the Korean War. He received the nickname “Pete” from his navy comrades and that’s the name that stayed for the rest of his adult life. He was trained as a machinist in the military then went on to pursue that work for McDonnell-Douglas Aircraft, Phelps Dodge Mining, and Arizona Public Service. He loved gardening, growing and photographing flowers, camping, bird watching, and fishing. He served many years as a leader in the Boy Scouts of America. He was baptized into The Church of Jesus Christ of Latter-day Saints in 1975 and served as a member of the Bishopric and on the High Council. He is survived by: wife, Cherryl Ann Winn; sister, Emily Doeblin; children, Teresa “Terri” Lynn Potter, Graham, TX; Henry (Carla) Potter, III, Graham, TX; Cindy (Kurt) Standley, Los Alamos, NM; Chad Boggess, Hurricane, UT; Wendy Sayre, Silver City, NM; Erin (Steven) Jensen, St George, UT; Shana (Reece) Garrett, Pittsburgh, PA; 23 grandchildren, and several great-grandchildren. He was preceded in death by his parents and first wife, Jean Roll. The family would like to give special appreciation to Trinity and Brie, and the entire staff at SUN TREE HOSPICE Co. Funeral services will be live streamed via Zoom on Monday, April 12th 2021 at 11:00 am. https://www.youtube.com/watch?v=jjhQZJH9ong&t=11s

The family of Henry "Pete" Paul Potter Jr. created this Life Tributes page to make it easy to share your memories.

Send flowers to the Potter family.