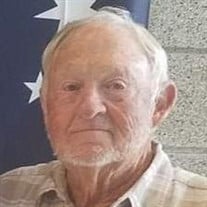 Howard Molen Roper Jr, husband, father, grandfather, great grandfather, brother, uncle and friend passed away peacefully after a courageous battle of pancreatic cancer surrounded by his family on August 25, 2019. Howard was born on November 25, 1938, in Salem Utah, to Howard Molen Sr and Lois Roper. He and his 5 siblings were raised on the family farm in Salem. He married Carolyn Huff (later divorced) together they had a daughter. He then married Mary Jane Deuel on February 12, 1965 in Spring Lake Utah. They were married for 54 years, together they had 3 children. He was a member of The Church of Jesus of Christ of Latter-Day Saints. The love for working on a farm never left him as he graduated from Spanish Fork High, he went to Snow College and received an associate degree. He continued his education at Brigham Young University where he graduated in 1966 and started working for the Bureau of Reclamation, then moved to the Soil Conservation Service (Natural Resources Conservation Service). He worked for 33 years and retired in 1998. During his career, he moved his family to several cities around the state of Utah where he acquired many close friends. He retired while living in Cedar City. In 1963, he joined the Utah National Guard. He served in both the 1/116 Engineers in Springville and 2/222 FA in Cedar City. He retired in 1994 after 27 years of service. He took pride in serving his country. He loved to spend time at Panguitch Lake. There are not many roads that he hasn’t traveled around the Lake during all seasons of the year, whether by truck, snowmobile, or UTV. He loved making things out of wood; there was nothing that he couldn’t build. All we had to do was say, “Dad, look at how cool this is!” and he would get to work and make us one. He loved spending time with MJ on the golf course. After retirement they moved to St. George. He loved providing service to various civic groups throughout his life. He was a member of the Elks Lodge for many years. He taught us all the meaning of hard work and if he didn’t feel we were working hard enough he would let us know. He left his mark at the house complex they lived at, in doing many landscaping projects. He also spent many hours teasing his children, grandchildren and friends. Howard is survived by his wife, Mary Jane Deuel Roper; children Janalee, Stephanie (Murray) Condie, Jason (Amy) Roper, Jamie (Sam) Rex; 2 brothers and 3 sisters. He had 13 grandchildren and 5 great grandchildren. Preceded in death by his parents. The family would like to thank the staff at Dixie Regional Medical Center for the care they provided. We also would like to thank Encompass Health for the care they provided in his last hours. In lieu of flowers the family ask that you donate to the Huntsman Cancer Center in his name. Funeral services will be on Saturday, August 31, 2019, at the East Ridge Ward, located at 912 South 1740 East, St. George at 10:30 am. A viewing will be held at the same location on Friday August 30th from 7-8 pm and from 9:00-10:15 am prior to the service. Interment with military honors will be at the Panguitch City Cemetery at 2:30 pm. Family and friends are invited to share tributes online at www.SerenityStG.com. Arrangements and memorial tree planting by Serenity Funeral Home, 986-2085.

The family of Howard Molen Roper Jr created this Life Tributes page to make it easy to share your memories.

Send flowers to the Roper family.