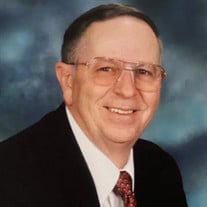 James Allen Barber, age 84, passed away on Friday, November 29, 2019 in St. George Utah. Jim was born in Sryacuse, Utah on September 2, 1935 to Ethel and Wallace Benjamin Barber and was the youngest of eleven children. Jim attended high school in Davis County, Utah and married his high school sweetheart, Janet Weatherston, shortly after their graduation in August of 1954. After high school they moved to California for a job with Lockheed Martin and began raising their family in the Bay Area. After nearly 20 years Jim missed the farming life of Utah and returned to work on the family farm – Harold’s Dairy Milk Farm. They then returned to California where Jim became the owner of several Mobile service stations and also worked as a purchaser at a manufacturing company. In California they raised their four children, Doug, Julie, Dean, and Laurie. He loved coaching his two sons’ baseball teams and was an avid sports fan throughout his life. He never missed a San Francisco 49er’s game or a BYU football game – something that he passed on to his children and grandchildren as well. Jim also loved training and riding his quarter horses and he raised many horses in both California and Utah. After retiring, they returned to Mapleton, Utah where they built a beautiful farmhouse and raised horses on the “Lazy-J-Ranch”. Several years later they moved to Layton, Utah and then St. George, Utah to enjoy the warm weather and close friends. Jim was a member of the Church of Jesus Christ of Latter-Day Saints and served two missions with his loving wife to Nairobi, Kenya and Fort Lauderdale, Florida. While in Florida they weathered multiple hurricanes and Jim maintained the mission’s vehicle fleet for more than 100 missionaries. Service in the church was something he loved to do and after their missions Jim served in the St. George, Utah temple for many years. He is survived by his loving wife, Janet Barber, his daughters, Julie Buckway and Laurie Barber, and his son Dean James Barber (Allison). He was preceded in death by his son, Douglas Harold Barber (Renee). Jim was a loving grandpa of 16 grandchildren and 32 great grandchildren. A short viewing and grave site service will be held for family and friends on Saturday, December 7, 2019 at 2:00pm at the Clearfield Park Chapel Ward Relief Society room, 838 East 600 South Clearfield, Utah, 84015. Interment will be in the Clearfield City Cemetery.

The family of James Allen Barber created this Life Tributes page to make it easy to share your memories.

Send flowers to the Barber family.