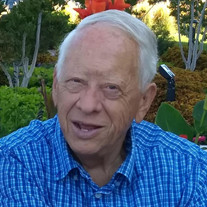 On March 24, 2022, Bruce Densley graduated from this life and reunited with his wife, Karen. James Bruce Densley was born October 27, 1935, to DeVone Oliane Densley and William Melvin Densley in Salt Lake City where he spent his younger years. While a Senior at South High he enlisted in the Utah Air National Guard and proudly served in the guard and Air Force Reserves. Bruce served a Mission for The Church of Jesus Christ of Latter-Day Saints to Northern California from 1955-1957. After returning from his mission, he continued his studies at the University of Utah. During this time, he met and married Sara (Sally) Jane Merrill in January 1960. The marriage was later solemnized in the Salt Lake Temple. Upon graduation, Bruce accepted a position in retail management and was transferred to northern California where they resided until the early 1970’s when he requested a transfer back to the Salt Lake area. Bruce and Sally had four wonderful children, Destiny, Shelley Jane, Julie Oliane, and James Merrill. They divorced in May 1983. On November 16, 1984, Bruce married his best friend Karen Bowen Wall. This marriage was later solemnized in the Salt Lake Temple. Karen was his constant and caring companion until she passed away on March 11, 2021. When Bruce and Karen married, Bruce gained two more wonderful daughters, Wendy Marie and Tonya Kaye. Bruce stated that he loved all six unconditionally and with all his heart, that his family was his heritage in this life. To Bruce and Karen their family was their life and they received great joy from them. In 2002, Bruce and Karen had a home built in Virgin Utah. He said it was “easier to shovel sunshine then the cold white stuff”. They both loved Virgin and said they never wanted to live anywhere else. In 2004, Bruce was elected to the Virgin Town Council where he served for 10 years and was then elected Mayor for 4 years. He said he loved this job (most of the time). While living in Virgin, Bruce served on the local fire board for many years and loved his job. He served proudly and patriotically and was a friend to all local law enforcement. Bruce was preceded in death by his father and mother, his wife, brother Paul and wife Leanore, his brother Art, a brother-in-law Shiogi Sugaya, a sister-in-law Sandra Beddes. He is survived by their 6 children Destiny, Shelley (Steve), Julie (Curtis), Jim, Wendy (Damon), and Tonya (Wes), 11 grandchildren, and 3 great grandchildren. Also, by brothers Steven (Cheryl), Don (Bonnie), Sister-in-law Elaine Densley, brother in-law Gary (Vida) Bowen, sister-in-law Marica (Dennis) Wilson, brother-in-law David Beddes. Funeral services will be held on Wednesday, March 30, 2022, at 11:00 a.m. at the Springdale Ward Chapel. A viewing will be held prior to service from 9:00 a.m. – 10:45 a.m. at the same location. A viewing will also be held on April 1, 2022, from 9:00 a.m. - 10:45 a.m. at Lindquist Mortuary, 1867 N Fairfield Rd, Layton, UT 84041 with graveside services following at the Farmington City Cemetery. The family wishes to thank Serenity Funeral Home of Southern Utah and Lindquist Mortuary of Layton for their services.

On March 24, 2022, Bruce Densley graduated from this life and reunited with his wife, Karen. James Bruce Densley was born October 27, 1935, to DeVone Oliane Densley and William Melvin Densley in Salt Lake City where he spent his younger years.... View Obituary & Service Information

The family of James Bruce Densley created this Life Tributes page to make it easy to share your memories.

Send flowers to the Densley family.