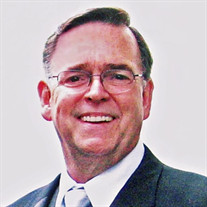 Troutdale, OR - James Richard Heemeyer, 75, beloved brother, husband, father and grandfather passed away at home from causes due to age on February 21st, 2021. Jim was born on Thursday, October 25th, 1945 in Watertown South Dakota to Violet Marie Karrels and Harold John Harm Heemeyer. Much of Jim’s youth was spent outdoors. He enjoyed the summers at Ben and Mae Heemeyer’s farm in South Dakota. He moved often with his siblings and parents, living in South Dakota, Minnesota, California, Wyoming and Nevada and eventually ended up in Salt Lake City, Utah. He helped support his family with numerous paper routes and in 1964 he graduated from East High School. On October 11th, 1968, he married Jeanne Forsyth from Cedar City, Utah in the St. George temple. He was drafted soon after, but was declared unable to serve. They purchased their first home on Gilmer Drive and were blessed with their four children. He was in management for the local Safeway until 1970 when he opened the Cycle Villa Motorcycle Shop on South State and acquired the Husky Station next door. In 1974, he went to work for Harmon’s City and helped open the Ogden and Brickyard stores. In 1980, he and his family moved to Troutdale, Oregon. He purchased two Arctic Circle franchises in Portland and a 200-seat dinner house. In 1986, he transitioned into the insurance and real-estate markets and in 1994 he became an independent Hearing Aid Dealer. Jim retired in 2014. He enjoyed swimming, gardening, gold prospecting and spending much needed time with his sweetheart and eternal companion, Jeanne, and their children and grandchildren. Jim was a member of The Church of Jesus Christ of Latter-day Saints. He loved the Lord and served faithfully for many years. He enjoyed helping others through his callings in Scouting, Elders Quorums and Bishoprics. Jim was an avid reader and had a thirst for knowledge. He was very passionate about history, religion and politics and loved sharing his beliefs and ideas with others. Jim had a commanding passion for the causes he believed in. He was an ambitious dreamer, an idealist and a teacher, who always shared his dreams for the future. We will be forever grateful for the lessons he taught and will treasure our memories of him. Love you forever… until we meet again. He is preceded in death by his father, Harold Heemeyer, his mother, Violet Marie Karrels Heemeyer Thomson, his step-dad Garth W. Thomson, his brothers Myron (Mick) Heemeyer and David Heemeyer and his niece Susan Rae LeMmon Hill. Jim is remembered with love by his wife of 52 years, Jeanne Forsyth Heemeyer, his four children and their spouses, Trena (Dave) Hawken, Michelle (Dan) Caldwell, Richard (Lori) Heemeyer, and Ben (Melissa) Heemeyer, his 15 grandchildren, Courtney, Samantha, Lainie, Amy, Marcus, Gracie, Thomas, Landon, Hallie, Logan, EmmieJean, Ian, Leah, Colin and Dallin, his great-granddaughter, Maevie, his sister Lois Marie (Gary K.) O’Brien as well as many sister and brother in-laws, nieces, nephews, cousins and dear friends. Funeral Services will be held on Monday, March 1st, 2021 at 11:00 a.m. at the Newcastle, Utah LDS Chapel, 55 S Main St. A viewing will be held before the funeral from 9:30 a.m. – 10:30 a.m. Interment will be at the Newcastle Cemetery, 1000 West 300 South. The Funeral Service will be available live stream via Zoom at https://zoom.us/j/93296462988?pwd=TnB4ZFJScHptdjhoOS9KSWppdzFjZz09 Meeting ID: 932 9646 2988 Passcode: 018134 The family would like to thank the caring staff at Brighton Hospice Services, Threadgill's Memorial Services and Serenity Funeral Home of Southern Utah. They would also like to thank all those who have given their time and talents in service of our family.

Troutdale, OR - James Richard Heemeyer, 75, beloved brother, husband, father and grandfather passed away at home from causes due to age on February 21st, 2021. Jim was born on Thursday, October 25th, 1945 in Watertown South Dakota to Violet... View Obituary & Service Information

The family of James Richard Heemeyer created this Life Tributes page to make it easy to share your memories.

Send flowers to the Heemeyer family.