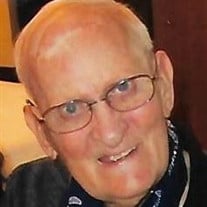 James Douglas Hendrickson, 84, moved on to his eternal home on May 4, 2018 after a valiant challenge with Parkinson’s disease at the Southern Utah Veteran’s Home, Ivins, Utah. His devotion to his family and his firm belief in God supported him during his 15 years of struggle with the disease. Jim, the youngest of 4 siblings, was born September 5, 1933 in Madison, Minnesota to Elmer and Ella (Sjolie) Hendrickson. Elmer, a theater movie projectionist, passed away when Jim was 8 years old after a film caught fire while at work. Ella was a professional seamstress. In 1951 Jim, aka Jimmy, graduated from high school in Brownsville, Texas. Then he studied Aeronautical Engineering at Texas A & M and the University of Minnesota. After joining the Navy in Minnesota, Jim was sent to Pensacola, Florida and became a pilot. Later, he was transferred to Hutchinson, Kansas to sharpen his flying skills. While trying to keep cool one hot summer day, Jim found Beverly (Bev) Jean Warnock at the Sterling Lake in Sterling, Kansas, six miles west of her farm home. Upon seeing a beautiful blond, he told his friend Dean, “That is the girl I am going to marry.” He asked her where to buy a good milkshake as a pickup line. Jim met her parents while courting, and on March 23, 1958 at the Midland Church, east of Sterling the “Flyboy” married the “May Queen” of Nickerson High School. The day of the wedding, it was raining so hard that one of the guests had to drive his tractor to get to the wedding. After the wedding, the couple drove to Florida in Jim’s 1954 Oldsmobile Starfire convertible for their month-long honeymoon (Jim and Bev just celebrated their 60th wedding anniversary). Upon returning from their honeymoon, Jim and Bev moved to Minneapolis, Minnesota. Jim was employed by the U.S. Postal Service. Later, Jim used his love for logic and computers and joined his brother Arnie, where he began his computer career with Remington Rand in Minneapolis/St. Paul, Minnesota. In 1972 he transferred to Salt Lake City, Utah. Later, Jim retired from Unisys (previously Remington Rand) after 30 years of service. Jim and Bev then ran a storage facility in Salt Lake City for 8 years. It was then Jim learned he had Parkinson’s Disease. Jim’s favorite joys were playing his Baby Grand piano to relax, reading from his massive collection of books, fixing things with his countless tools which he shared with his sons, his great love of Oldsmobiles and music, especially “How Great Thou Art” as sung by George Beverly Shea. Jim is preceded in death by his parents, Elmer Hendrickson and Ella (Sjolie) Hendrickson; brothers Arnold, (Arnie) and Everette (Ev); Jim is survived by his wife, Bev, and two children, Mark of Salt Lake City, and Bruce (Dawn) of St. George, Utah; grandchildren Joshua, Mackenzie, and Talon; great-grandchild Ruben. He is also survived by his sister, Grace, of Bloomington, Minnesota and a loving extended family. If you would like to join us in celebrating Jim’s life, you may send cards to Bev and the family at 1768 East 280 North, #221, St. George, Utah. Per Jim’s request, there will be no funeral service. In lieu of flowers, donations may be sent to the Michael J. Fox Foundation for Parkinson’s Research: Donation Processing The Michael J. Fox Foundation P.O. Box 5014 Hagerstown, MD 21741-5014

James Douglas Hendrickson, 84, moved on to his eternal home on May 4, 2018 after a valiant challenge with Parkinson&#8217;s disease at the Southern Utah Veteran&#8217;s Home, Ivins, Utah. His devotion to his family and his firm belief in God... View Obituary & Service Information

The family of James Douglas Hendrickson created this Life Tributes page to make it easy to share your memories.

James Douglas Hendrickson, 84, moved on to his eternal home on...

Send flowers to the Hendrickson family.