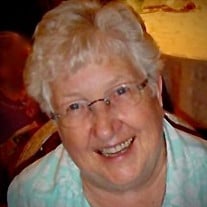 Janet May Pope Hooper, 84 years old, passed away October 4, 2019, in St. George, Utah. She was born January 22,1935 to Clara May Hartley and Harry Abraham Lincoln Pope in Corvallis, Oregon. Janet had one sister, Lina Lou, who she loved dearly. She went to school in Corvallis, Oregon and graduated from high school there. After high school, she attended Oregon State and later in life graduated from California State University Sacramento with a Bachelors Elementary Education. She met William Gordon Hooper in Corvallis while participating in a Methodist youth group. They were married in the Methodist Church in 1954. Later they joined the Church of Jesus Christ of Latter-Day Saints. They had five children together and raised their family in Sacramento and Carmichael California. They later divorced. Janet loved little children. She taught preschool, kindergarten through 4th grade and taught the parent participation program. She served three service missions for the Church of Jesus Christ of Latter-Day Saints, a humanitarian mission, an Oakland Temple mission and a BeeHive clothing mission. Janet loved the Savior and The Church of Jesus Christ of Latter-Day Saints. Janet enjoyed sewing, attending plays, musical performances, traveling, and most of all spending time with family and friends. She traveled to most of the US states including Hawaii and Alaska. She traveled to China, Japan, Cancun, Mexico, Australia, New Zealand, Canada and Africa. Janet said: “I enjoyed being a wife and mother most of all the things I ever did.” She is survived by her children: William G. Hooper (Leann) Orangevale, CA.; Elizabeth A. Shoemaker (Terry) Charleston, Utah; Cynthia J. Dalton (Lincoln) St. George, Utah; Patricia J. Davis (Ken) Isleton, CA; Steven B. Hooper (Kendra) St. George, Utah. She has 20 grandchildren, 30 great grandchildren with 4 more on the way. Niece; Deirdre Berry (Ben) Lake Oswego, Oregon She is preceded in death by her: Mother; Clara May Hartley Pope, Father; Harry Abraham Lincoln Pope; Sister; Lina Lou Mitchell Janet lived for 5 yrs in Spring Gardens Assisted Living. She enjoyed her years there. The family would like to thank the staff at Spring Gardens and Dixie Regional Medical Center. The kindness and care of Mother by the CNA’s, nurses and doctors will never be forgotten. Funeral services will be held Saturday 1:00 p.m. October 12, 2019 at the Church of Jesus Christ of Latter- Day Saints 1222 East Brigham RD. St. George, Utah. Interment following at Tonaquint Cemetery 1777 S. St. George, Utah 84770. Family and friend are invited to share tributes online at www.Serenitystg.com.

Janet May Pope Hooper, 84 years old, passed away October 4, 2019, in St. George, Utah. She was born January 22,1935 to Clara May Hartley and Harry Abraham Lincoln Pope in Corvallis, Oregon. Janet had one sister, Lina Lou, who she loved dearly.... View Obituary & Service Information

The family of Janet May Pope Hooper created this Life Tributes page to make it easy to share your memories.

Send flowers to the Hooper family.