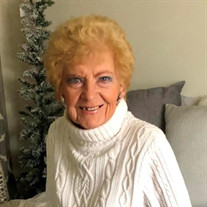 Janet Arlene Hymas was born on May 31, 1927, to John Robert and Janet Gillespie Maxwell in Ogden, UT. She died on November 17, 2021, in the loving care of her granddaughter Carrie and her husband Brian along with their children in Cedar City, UT. Arlene met her sweetheart at a young age in the shipyards in Oregon where Arlene had lied about her age to get a job. She married her husband Jack Hymas on June 1, 1946, after Jack served in the Navy during WW II. Together they had six children and lived in Salt Lake, Bountiful, and Eli Nevada throughout their marriage. Arlene was affectionately given the nickname of “Speed” by her husband for never stopping and speeding around the house. She loved to stay busy ironing, cooking, and cleaning but also found time to be Fashion Model and lighting sales lady. They later moved in 1978 to Cedar City to start Cedar Electric Supply with their son Jack and his wife Marilyn. They were active in the Elks Lodge where they loved dancing. Her hobbies included shopping at JC Penny, ordering Avon jewelry and taking pictures every day with her Minolta camera. For many years she kept the Albertsons photo department in business. After living in Cedar City for almost 8 years they retired to St. George, Utah where they hosted many family barbeques. Jack’s health took a turn for the worst and Arlene had to care for him for many years until he passed in 2008. After living a very active life for 94 years she is now reunited with four of her children and husband. Arlene was a devoted wife, mother, and grandma and she was often found in the kitchen preparing savory meals for anyone that came to dinner. Her house was always open house and she often took care of multiple people and people were drawn to her contagious smile. Her zest for life never waivered and even after living with dementia for many years she never gave up on wanting to live to live her life to the fullest. She will be remembered for her spunkiness and her attitude to put one foot in front of the other. Grandma loved to walk her loyal companion Princess, (her Yorkshire Terrier) multiple times a day around the block. After Princess died a few months ago she forgot to take her walks and ultimately, this was her downfall. Grandma always said once you stop moving you go downhill and she was right. Grandma touched many peoples lives and she will forever be remembered for her sassiness and quick wit to the end. The family would lovingly like to thank the care and love from Suntree Hospice and the love from Waylene Woods her special CNA. Grandma Hymas will forever live in our hearts and her legacy will never be forgotten. She is survived by: her daughter Karen (Dale) George and Debbie Cameron; 16 grandchildren, Jenny, Stacy, Camie, Dax, Nick, Monica, JR, Carrie, Kellie, Tony, Hannah, Rachel, Kory, and Shelby; She also had 18 great grandchildren; and three great-great-grandchildren. She was proceeded in death by: her children Lynne Silver, Robyn Riggs, Jack Hymas, and Larry Hymas; along with two brothers; four sisters; and two grandsons Christopher and Zachary. Funeral services will be held Tuesday, November 23, 2021, at 11:00 a.m. at the Christ the King Catholic Church, 690 Cove Dr., Cedar City, UT. A viewing will be held prior to the service at 10:00 a.m. Interment will take place at the Cedar City Cemetery. In lieu of flowers please make donations to the Alzheimers Association. Arrangements are under the direction of Serenity Funeral Home of Southern Utah, 435-986-9100.

Janet Arlene Hymas was born on May 31, 1927, to John Robert and Janet Gillespie Maxwell in Ogden, UT. She died on November 17, 2021, in the loving care of her granddaughter Carrie and her husband Brian along with their children in Cedar City,... View Obituary & Service Information

The family of Janet Arlene Hymas created this Life Tributes page to make it easy to share your memories.

Send flowers to the Hymas family.