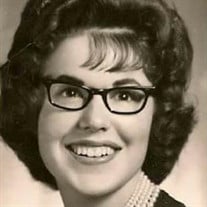 Jayne Robinson Barton passed away in St. George, Utah on April 27, 2018. Born to Mabel Robb Robinson and Bryon Albert Robinson in Paragonah, Utah on December 29, 1939, Jayne spent her first 13 years roaming the surrounding hills of Paragonah. Each summer her entire family would move up into the mountains to give her mother relief from her asthma. Although she lost her father just before her 5th birthday and resources were extremely limited, she described these years as joyful. The family moved to Salt Lake City in 1953. She graduated from West High School in Salt Lake City in 1957, and went on, several years later, to be called on an LDS mission to the California mission. When Douglas Lee Barton asked her to marry him, she decided, in counsel with her Bishop, to decline the call, and to stay home instead and marry her sweetheart. They were wed June 24, 1964 in the Salt Lake Temple and were blessed with five children. Jayne worked for IBM and earned several service awards through-out the years. In the late 1980s she was given a special temporary 3-month assignment as a project manager in San Francisco. And although she was an incredible employee, her heart was always at home with her family, which was the center of her focus and joy. Jayne helped her husband immeasurably to obtain a Ph.D., tutoring him, focusing him on that which was important, and typing countless drafts. She was truly an amazing wife and mother. She loved to sew, read, travel, be with her family, and take long drives with her husband enjoying the beauties of nature. She was kind, wise, patient, hard-working and an extremely positive force. Jayne had an unusually loving and compassionate nature. We are still unsure of just how many people call her mom, but it is a big number. She was smart, strong and constant. She loved her people fiercely. She was a woman of strong faith and taught by example. She was extremely grateful for our Savior and held tightly to her faith in Him. Both Jayne and Doug, as well as their children, are profoundly grateful for their marriage, sealed in the Salt Lake Temple. We acutely feel her absence, and she will be sorely missed. She is survived by her loving husband Douglas Lee Barton and their children Matthew (Kimberly), Rebekah, Joshua (Megan), Clinton (Mykel), 11 grandchildren, her sister Audrey and her brother Garth (Pete). She is preceded in death by son Joseph (Darby), her parents, and her brothers Milton and Antone. Services will be held at the Paragonah LDS Wardhouse, 79 N. Main St., Paragonah Utah at 2:00 p.m. Thursday May 3, 2018. Prior to the funeral, a viewing will be held beginning at 12:00 noon. In lieu of flowers the family would appreciate donations to either LDS Charities or the American Lung Association.

The family of Jayne Robinson Barton created this Life Tributes page to make it easy to share your memories.

Send flowers to the Barton family.