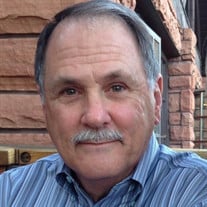 Jeffrey Lynn Carmignani passed away peacefully surrounded by his family after a short battle with an aggressive cancer. Jeff was born to Wanda Louise (Ming) and George H Carmignani on July 29, 1948, in Bakersfield CA. He was the second of three boys. Jeff spent his childhood with his brothers and attended South Bakersfield HS, graduating in 1966. In the summer of 1966 Jeff was baptized as one of Jehovah’s Witnesses and shortly thereafter committed to serving in full time ministry. This path also led him on an adventure to move to Utah. He put down roots when he met and married Aileen Taylor on August 30, 1969, in Provo Utah. Together they continued in full time service until they began their family. Melissa arrived in September of 1974 and being a dad was a joy for him. Adding to that joy brought Candace in December of 1979. Having grown up with only boys, and then becoming a dad to two amazing daughters brought all sorts of wonderful, hectic, laughter, drama, and love that he never knew he needed. These two girls extended the family by each marrying a wonderful man that he loved spending time with. Jeff was a proud “Papa” to Jake, Jude, Maggie, and Wren. and enjoyed teasing, teaching, and spoiling each of them. He was insanely proud of these 2 young families, loving them and their mother with his whole heart. Jeff enjoyed working and keeping busy, even after he retired. As a young man, he worked as a vet tech then moved on to the trade of brick masonry. In the early 1980s, he began a career that would later lead to his appointment as Vice President of logistics to the world’s largest fitness manufacturer, Icon Health & Fitness, where colleagues valued his honesty and the strong work ethic, he brought to everything he applied himself to. Jeff loved an adventure. He enjoyed reading about and researching new places he would like to see. He visited many countries for work and for enjoyment. Other hobbies included landscaping, woodwork, reading, golf, hunting and fishing. He sincerely loved to learn and could recall things about any topic you could imagine. This much-loved man was a strong presence in the lives of family and friends. He always made time for family, ready with an arm to lean on, a shoulder to cry on, a voice of encouragement, a confidant to rely upon for good advice, a friend to laugh with, a buddy to tease. He was our brother to love. Jeff was faithful and loyal to his God Jehovah and had full faith in his promise of the resurrection (John 5:28, 29). His family looks forward to seeing him again according to Jehovah’s promise in Job 14:14,15 which says “You will call, and I will answer you. You will long for the work of your hands.” Jeff is survived by his wife Aileen Daughters Melissa (Dave) McEvoy, Denver CO Candace (Micah) Hildreth St. George UT Grandchildren Jakob Hoover Wren McEvoy Jude Hildreth Maggie Hildreth Brothers Mike and Chris Jeff Carmignani Memorial Time: Sep 11, 2021, @ 2:00 PM Mountain Time (US and Canada)

Jeffrey Lynn Carmignani passed away peacefully surrounded by his family after a short battle with an aggressive cancer. Jeff was born to Wanda Louise (Ming) and George H Carmignani on July 29, 1948, in Bakersfield CA. He was the second of three... View Obituary & Service Information

The family of Jeffrey Lynn Carmignani created this Life Tributes page to make it easy to share your memories.

Send flowers to the Carmignani family.