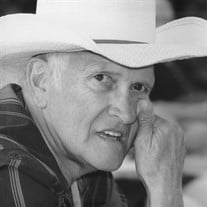 Santa Clara, UT – Jerry Blaine Carter, age 83, passed away on June 30, 2018. He was born on December 3, 1934 to Ray Arnold Carter and Wilma Gladys Starkey in Tunas, MO. He met the love of his life, Ruth Edna Wood in Lyle, WA and was married on February 21, 1953. They had four children and were married for 65 years. Jerry grew up in Appleton, WA on his parents’ ranch. He always loved to hunt and spent many years enjoying hunting with friends and family. He enjoyed wood working and created his own line of canes, walking sticks, cribbage boards and other small items. In later years he played horseshoes competitively, winning many awards and medals and making many new friends. As an adult Jerry joined The Church of Jesus Christ of Latter-Day-Saints and served in many callings as well as serving a senior mission with his wife at church historical sites in Kirtland, OH and St. George, UT. Jerry worked for 43-1/2 years out of Portland, OR as a locomotive engineer for Union Pacific Railroad, travelling the Columbia River Gorge on the Oregon side. After he retired from the railroad, he and his wife moved to Santa Clara, UT where he worked for 19 years as a driver for Ken Garff St. George Ford, travelling all over the country picking up and delivering vehicles and making even more new friends. Jerry is survived by his wife, Ruth, his children, Debbie (Dennis) Ruitenbeek, of Stockton, CA., William (Joelle) Carter, Sr, of Troutdale, OR, Janet (David) Dalling of Summerville, SC and Patricia (Matthew) Blake of Santa Clara, UT, as well as 14 grandchildren and 37 great-grandchildren. Jerry is preceded in death by his parents, Ray Arnold Carter and Wilma Gladys Starkey, his brothers Larry and Ronald Carter and his sister Racine Bertschi. The family would like to thank the staff of Dixie Regional Medical Center for their kindness and caring during this difficult time. Jerry made more new friends there during his final weeks. Funeral services will be Saturday, July 7, 2018, 11:00 am at the LDS chapel at 3680 Pioneer Parkway, Santa Clara, UT. A viewing will be held Friday, July 6, 2018 from 6:00-7:00 and July 7, 2018 from 9:30-10:30 at the same location. The private family interment will be at the Santa Clara Cemetery.

The family of Jerry Blaine Carter created this Life Tributes page to make it easy to share your memories.

Send flowers to the Carter family.