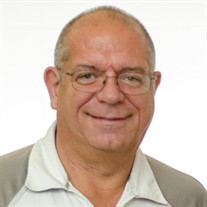 Jerry Rulon Pace, age 65, was eagerly welcomed back to his heavenly home on November 21st, 2020 where his precious daughter Brittany was the very first angel to receive him with her lovingly open arms. Jerry was born on February 24th, 1955 to Rulon Albert Pace and Angelina Kourianos Pace in Price, Utah. Jerry spent his childhood alongside his big sister Joanne Pace Carpenter and his baby brother David Albert Pace. During his youth Jerry enjoyed working with his Father delivering coal and freight to the local coal mines. Jerry also participated in the marching band and madrigal choir at Carbon High. Jerry was blessed with a strong bass voice that would many times quiet the crowd as he sang to them. This singing phenomenon lasted his whole life. When Jerry turned 19 he was called to serve an LDS mission in Osaka, Japan. He acquired a deep appreciation for the people he connected with and their culture. It was during his mission that his friend Gina Bell started writing him. Once Jerry came home from his mission this small start of a friendship was able to develop into what would become a truly astounding love story. Jerry and Gina Bell Pace were married for time and all eternity in the Manti, Utah temple on December 17th, 1976. Jerry was working at H & J Supply in Price, Utah but later was offered an outside salesman position at Rhinehart Oil in Salt Lake City. He was always fond of the small town that held so much of his Greek heritage but this new venture moved him, his wife and five small kids to Sandy, Utah where the central part of his life was spent. At this time he and his wife Gina added two more children to the total?? Jerry spent 17 years with Rhinehart Oil. Towards the latter part of this career move Gina decided to explore doing shelter care…which turned into Foster Care…and in turn resulted in the adoption of four more children. Jerry’s family was now complete and so was his time in Sandy where he had cultivated such meaningful relationships with neighbors and long lasting golf buddies. He finished his job at CCI Mechanical and moved south to Hurricane, Utah to continue his life with Gina and start yet another adventure with S & S Mechanical as a sales manager. Jerry and Gina truly enjoyed bringing up their family in the LDS faith. The gospel principals gave their family a foundation that would be so important in ways they could not have known at the time. Jerry has always had an unwavering testimony of the Gospel of Jesus Christ and the Atonement. He was never shy about sharing the things he knew to be true and only ever wanted others to share in the joy of his faith that he so fully believed in. In February of 2019 Jerry suffered a spinal cord injury due to stage 4 liver Cancer and he found himself wheelchair bound but so very determined to walk again. He was, at this time, inspired through a talk given by Jeffery R. Holland to have patience. Jerry, the most patient man on the planet, found himself desiring to become more patient!! He received countless blessings for his efforts to have increased patience and forged ahead to walk again unassisted and play his beloved game of golf. Jerry is preceded in death by his beautiful daughter Brittany, his Father, Mother and little brother David. He is survived by his eternal sweetheart Gina Bell Pace and their children; Jeremy (Suzette), Adam (Marianne), Alison, Trevor (Whitney), Caleb (Kelsey), Trent (Krista), McCall, Sadie, Ethan and Mason. He is also survived by nineteen grandchildren and one great granddaughter. Jerry’s children and grandchildren wish for you to know and understand of the importance that this great man had in their lives. He was a gentle Father and an even kinder “Papou” who taught us all by his consistent example the concept of hard work, compassion, positivity, integrity, service, humility, gratitude and respect. He wished for each of their lives to be fulfilling and watched in awe as they found out in their own ways how to accomplish that.

Jerry Rulon Pace, age 65, was eagerly welcomed back to his heavenly home on November 21st, 2020 where his precious daughter Brittany was the very first angel to receive him with her lovingly open arms. Jerry was born on February 24th, 1955... View Obituary & Service Information

The family of Jerry Rulon Pace created this Life Tributes page to make it easy to share your memories.

Jerry Rulon Pace, age 65, was eagerly welcomed back to his heavenly...

Send flowers to the Pace family.