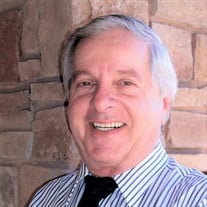 John Frederick Cicero, 79, died on August 22, 2021 in St. George, UT. John was born in Detroit, MI on September 27th, 1941 to John and Marie Cicero (Maciejwski). He was raised in Detroit and graduated from Holy Redeemer High School. He proudly served in the Navy on the USS Farragut and was discharged in 1964. In 1969, he graduated from the University of Michigan. He moved to Denver, CO in 1970 where he met his future bride, Deanna Munsie. John had one son, J. Michael, from a previous marriage, and Deanna had a daughter, Lori, and son, Greg from a previous marriage. They blended their families and later added two more children, John and Gina. John and Deanna moved to St. George, UT in 2004. John was a real estate broker for 45 years. He was an avid car enthusiast. His hobbies included street racing in Detroit, drag racing at Bandimere Speedway, building and restoring cars, golf, and bowling. John is preceded in death by his three sisters, Rose Arble, Rita Chateauvert and Beverly Cicero of Michigan. John is survived by his wife of 48 years, Deanna; children Lori Bishop (Richard) of Westminster, CO, Greg Kivett of Littleton, CO, J.Michael Cicero of Florida, John Anthony Cicero (Jen) of Colorado Springs, CO, and Gina Welch (Danny) of Los Angeles, CA; his eight grandchildren, 4 great-grandchildren, and his sister Betty Caruso of Westland, MI. Memorial Service will be held in Denver, CO at the Evans Chapel at the University of Denver on September 21, 2021 at 11:15 a.m. Burial service with military honors will be held at Fort Logan National Cemetery in Denver, CO on September 21, 2021 at 1:15 p.m. A gathering/Celebration of Life will be held after the burial at Peak Community and Wellness Center (6612 S Ward St, Littleton, CO 80127) at 2:00 p.m. *For those that are planning on attending the Memorial Service at Evans Chapel, you may park at parking structure E (also called Evans Parking Structure). The entrance is located off of High St., on the east side, just south of Evans Ave. A parking pass will be provided. To get to the chapel from the parking structure, follow the path from the southeast corner of structure E to the South, (you’ll walk between Nagel Hall on the west and Joy Burns Center on the East), Evans Chapel will then be on your left. Please follow the map link below to see where Evans Chapel is located on the campus: https://goo.gl/maps/W6ifXJqctNep3muh8

John Frederick Cicero, 79, died on August 22, 2021 in St. George, UT. John was born in Detroit, MI on September 27th, 1941 to John and Marie Cicero (Maciejwski). He was raised in Detroit and graduated from Holy Redeemer High School. He proudly... View Obituary & Service Information

The family of John Frederick Cicero created this Life Tributes page to make it easy to share your memories.

Send flowers to the Cicero family.