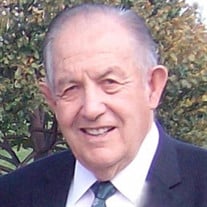 John Ray Hamblin, a valiant disciple of Jesus Christ, devoted husband, father & grandfather; passed away Sunday evening, December 22, 2019, in St. George, Utah. He was born March 9, 1930 in Eagar, Arizona to Roland S. and Josephine Wiltbank Hamblin. He was the middle child, being about 10 years younger than the oldest two siblings, Ida Rohrer and “Buzz” Hamblin and about 10 years older than the youngest siblings Wayland and Ellis Hamblin. He attended school at Round Valley High School in Eagar, Arizona and then attended Brigham Young University in Provo, Utah; where he met his eternal sweetheart, Donna Ashton. Ray served a mission for the Church of Jesus Christ of Latter-day Saints in the Northwestern States Mission. Upon completing his mission, he and Donna were married on August 15, 1952 in the Salt Lake LDS Temple. Ray was a genuine cowboy. He was a rancher and raised cattle along with being a Seminary & Institute Teacher for the Church Education system for 33 years. He taught in St. Johns & Eagar, Arizona; Missoula, Montana; & Davis County, Utah. He loved his students and always had a great story to tell! His storytelling spilled over into his life and family, keeping the kids, grandkids, nieces & nephews in stitches. He later wrote his stories in his and Donna’s life histories, and published 2 books about outlaws & cowboys! He and his Sweetheart served as ordinance workers in the Bountiful LDS Temple for 18 years and in the Palmyra, New York LDS Temple for 15 months. Together they served 4 senior missions in Barbados, West Indies; Roanoke, Virginia; St. George, Utah; and Palmyra, New York. Ray served as Bishop, Counselor, Stake Young Men’s President, Counselor in the South West Indian Mission, along with many other callings. He was a great example to all his family of service, love, and giving. He taught by example through temple attendance, faith, and a strong testimony of the Savior Jesus Christ. He lived what he preached without words. He is survived by his wife, Donna and his three children; Kevin (Edith Ann) Hamblin, Arcata, CA; Kristi (Brent) Simonson, Pocatello, ID; and Glenn Hamblin, Fruit Heights, UT; as well as 11 grandchildren, 17 great-grandchildren, and his two brothers, Wayland Hamblin, Rio Rancho, NM and Ellis Hamblin, St. George, UT. He was preceded in death by his Father and Mother and older siblings, Roland L. “Buzz” Hamblin, Safford, AZ and Ida Rohrer, Eagar, AZ. A Funeral-Memorial Service will be held at 24 South Country Lane, Fruit Heights, UT on Friday, December 27, at 1:00 pm. The Funeral will be at 11:00 am at the Morningside 2nd Ward, 900 South River Road, St. George, UT; with a viewing 1 hr prior, on Monday, December 30, 2019. Interment to follow at the Santa Clara Cemetery

The family of John Ray Hamblin created this Life Tributes page to make it easy to share your memories.

Send flowers to the Hamblin family.