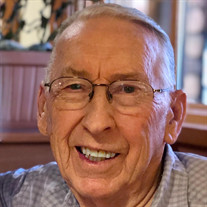 John Thomas Hovorka Jr., 88, unexpectedly passed away on January 11th, 2021 in St. George, Washington Co., Utah. He was born October 19th, 1932 in Quincy Township, Adams County, Wisconsin to John Thomas Hovorka Sr. and Eleanor Amanda Moshure. He attended grade school at both the McBride and Hadlock Schools in Quincy and was a member of the 4H club. In 1950 he graduated from Adams-Friendship High School in Wisconsin where he played some varsity basketball. He enlisted in the Navy and served for four years from early 1951 to 1955 achieving the occupational rating of boatswain's mate. He met Marlene Beverly Anderson at a dance through a mutual friend and they were married on March 19th, 1955. Together they were blessed with three sons, Kim, Dana, and Todd. John and Marlene were later divorced. On November 14th, 1984 he married Doreen Bates, who remained his “Sweetie Beetie” for the past 36 years. He was a devoted husband, faithful father, and loyal friend. He was slow to anger and quick to forgive. His countenance was inviting, and his disposition one of good cheer and contagious laughter. He loved fishing trips to Canada with his boys and extended family. He loved boating, waterskiing, archery, hunting, and snowmobiling. He was employed with the Nekoosa Paper Mill for 12 years from 1955 to 1967 and thereafter worked as a brakeman and conductor for the Chicago Northwestern Railroad where he ultimately retired. He was a faithful member of the Church of Jesus Christ of Latter-Day Saints and served diligently in many callings throughout his life. He served as a fulltime missionary alongside his wife Doreen at Cove Fort in Southern Utah. More than anything, he loved to teach and bear testimony of the living Christ and of His infinite and eternal atonement. He found great joy in serving in the temple on behalf of those who have left this world without the blessings of the gospel in their lives. His influence for good will be eternal as it continues to ripple forth across the sea of generations yet to come through all who knew him. He was proceeded in death by his parents, sister Edna Stoddard, first wife Marlene Anderson, a great granddaughter, a nephew, and a niece. He is survived by his wife Doreen, three sons Kim (Janet), Dana (Ann), Todd (Cheryl), stepdaughters Cheryl (Vance) Jenkins, Laura (Brent) Baxter, Andrea (Mark) Snow, 20 grandchildren, many great grandchildren, and brother Harold. A graveside service will be held his honor on Saturday, January 16th, at 1:00pm at Tonaquint Cemetery in St. George Utah. This will be limited to immediate family members due to COVID restrictions.

The family of John Thomas Hovorka Jr. created this Life Tributes page to make it easy to share your memories.

Send flowers to the Hovorka family.