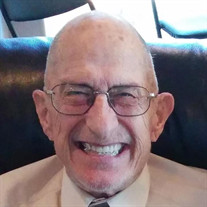 Our husband, father and grandfather, John LaRue Lightner, 84, passed away on September30, 2019 in St. George, Utah after a long battle with kidney failure. John was born on June 21, 1935 in St. George, Utah to Don Allen and Neida Canfield Lightner. John was born a few minutes after his identical twin, Jack. They were lovingly referred to as “Peat” and “Repeat”. Dad grew up in St. George and loved the area, and he loved telling stories about those years. His stories included swimming in the Virgin River, riding bikes, working for the newspaper office delivering papers and picking peaches. Dad rode his bike all over town, and even took “day rides” to Toquerville. Once they used their imaginations to build a tandem bike! Dad was especially proud to tell us about his part in the making of the old John Wayne western “The Conqueror”. He was paid $35 per day to have the time of his life. Dad attended Westwood Elementary School and graduated from Dixie High School. While attending Dixie High, Dad took a dance class. His favorite dance was the “La Raspa”, which he referred to as the jumping dance. He even demonstrated the moves on American Bandstand. Dad went on to attend LDS Business College where he played for the school’s basketball team. During his high school years, Dad joined the National Guard and later joined the Marine Corp. He was very proud to be a Marine. Oorah! Dad was stationed at Camp Pendleton (California), Okinawa, Japan and 29 Palms (California). While in Japan Dad learned some Japanese phrases. He loved to show off his skills even though they were limited. In fact, he only knew two or three phrases. While Dad was stationed in 29 Palms, he often visited Indio, California. Once he and a few of his buddy’s decided to see a movie. That is where he spotted a beautiful usher. One of his buddy’s dared him to talk to her. Dad took him up on it and John and Lina Francine Richardson were married on February 21, 1959. Dad worked mostly in the Banking Industry. To enhance his career he attended Riverside University (Riverside, CA) where he graduated with a degree in Business and Accounting. He worked his way up and eventually became branch manager. One of the perks to that position is that he got to work with some movie and tv stars. Two of the most memorable stars were Danny Thomas and Fabian Gregory. Dad’s happiest times were when he began to drive school bus in the Delta, Utah area. He loved driving the kids to and from school, as well as to swimming and wrestling meets. He was a teaser and had lots of stories to tell about those days, and it wasn’t easy for him when he had to step down. John is survived by his wife, Francine; their three children, Beverly Clark, John Craig Lightner and Julie (Richard) Ott; their grandchildren, Travis (Aubree) Clark, Bradley Clark, Jacob (Faith) Clark, Kylee (Adam) Woodbrey, Adam (Stefani) Ott, Justice Clark, Tyler (Bailey) Ott, McKenna Ott and Abigail Ott; as well as their great grandchildren; Aveline, Nicholas, Nathaniel, Peter, Shayli, Henry, Thomas, Miles and Natali. He also leaves behind his older brother, Denzil (Dorthy) Lightner. Everyone is welcome to join the family as we celebrate John’s life on Saturday, October 5, 2019 at 4:30 p.m. at the Church of Jesus Christ of Latter-day Saints, 1184 N. Dixie Downs Road.

Our husband, father and grandfather, John LaRue Lightner, 84, passed away on September30, 2019 in St. George, Utah after a long battle with kidney failure. John was born on June 21, 1935 in St. George, Utah to Don Allen and Neida Canfield Lightner.... View Obituary & Service Information

The family of John LaRue Lightner created this Life Tributes page to make it easy to share your memories.

Send flowers to the Lightner family.