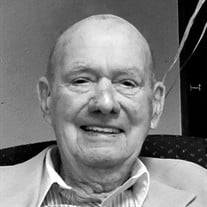 St George, Utah – Joseph Eugene ‘Gene’ Hopkins passed away on 8 April 2019 St George, Utah, having celebrated his 101st Birthday in January. He was born 29 January 1918 to Wilfred Bernard Hopkins and Theresa Mary Keenan in Swift Current, Saskatchuwan, Canada. He married Mary Michela Ponza of Soquel in Capitola, CA 29 June 1940. Themes of resourcefulness, pragmatism, and curiosity run through Gene’s life. He was the ultimate recycler. From discarded lumber, motors, tires, and cables, he created rehabilitation equipment for handicapped children, campers for his family, go-carts for his grandchildren, and countless swings and zip lines. His ingenuity brought smiles to the faces of many family members and friends, who at times shook their heads in bewilderment and asked, “What will he think of next?” Gene’s occupations were as varied as his ingenuity: ranch hand, baker, soldier, painter, contractor, fisherman, real estate developer, missionary, and most importantly husband, father, grandfather and great-grandfather extraordinaire. With the outbreak of WWII, Gene’s cooking skills were put to good use as a Mess Sargent in the 648th Tank Destroyer Battalion, XII Corps, 3rd Army. Under blackout conditions and with limited resources, Staff Sargent Hopkins delivered hot meals to soldiers on the frontlines of battle in the European Theater, earning the Bronze Star. Upon completion of his service in WWII, Gene returned to his wife, Mary, daughter, Jeanne, and their home in Redwood City, CA. Following the births of their two sons, Joe and Jon, Gene and Mary pioneered the hills above Soquel, CA. They established a ranch (complete with Gene’s trademark swimming pool), and created a home where all were welcome. It was there that Gene and Mary joined The Church of Jesus Christ of Latter-day Saints. Gene spent decades as a counselor in a Bishopric, Bishop, or as a Branch President. Many sought his counsel on spiritual and temporal matters. Accompanied by his charming, undaunted wife, Gene led a life filled with adventures in service: addressing welfare needs on remote islands in the Philippines, creating micro-loan projects for the impoverished, taking grandchildren to Hawaii, and providing those around him (whether at home or in obscure corners of the world) with a steady supply of homemade donuts. Gene’s determination and independence enabled him to live and to serve his fellowman for over a century. In fact, as he approached his 101st birthday, he was able to renew his driver’s license, which allowed him to continue serving in the temple and reading to the infirm. He will be missed by many, both near and far. He is survived by his 3 children: Jeanne (David Macdonald) of St George, Utah, Joe E (Sophia) of Fruitland, Idaho, and Jon E (Andria) of Roseburg, Oregon. His grandchildren number 18 and his great grandchildren 69. He is survived by his sister Mary Hopkins Messenger of Lincoln, CA. He was preceded in death by his 4 brothers who probably wondered which of them would be last to leave mortality----he was in the middle. A memorial will be held Saturday, April 20, 2019, at the Fort Pierce Chapel in N. Bloomington Hills at 1 p.m. Military Honors will be provided by American Legion Post 90. Interment will be held in Santa Cruz, CA. In lieu of flowers please donate to missionary endeavors. His family thank many at care centers and emergency personnel for their kind services.

The family of Joseph Eugene Hopkins created this Life Tributes page to make it easy to share your memories.

Send flowers to the Hopkins family.