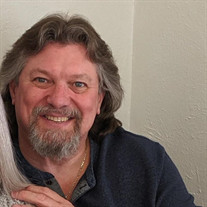 Joseph Patrick Lamoureux passed away on 25 March 2021 in St. George, Utah due to complications of Covid-19. Some people knew him as “Joe.” Some people called him “Pat.” Those in his family called him Patrick. Patrick was born in Wytheville, Virginia on 14 September 1962 to Joseph George Lamoureux and Patricia Wenona Sharp. He was the third of four children. Patrick spent most of his early childhood in Blacksburg, Virginia, sandwiched around a couple of years in Royersford, Pennsylvania, as the family moved there for his Dad’s work. He was an active boy, always up for adventure. The time he caught a shark (as a young boy) will live on in family lore forever. When he was in the 9th grade, his father’s work brought the family out west to Cedar City, Utah where he finished high school and made many lifelong friends. Patrick’s adventurous soul led him to work on a seismic crew in the southern states for a couple of years. Then Patrick settled in Las Vegas in the early 1990’s. It is here that he married Maureen Merry (later divorced), and where his beloved daughter Miça was born. From the time he was a little boy, Patrick had a passion for trucks, and this passion turned into a career driving cement trucks for various cement companies in Vegas. He poured cement for some of the casinos and other large construction projects there. It was fun driving around Vegas and having him point out his quality work that spanned the breadth and width of the Las Vegas valley. Because of his love for his country, and a rich family history of military service, he enlisted in the Army. He first became a member of a Nevada National Guard and later a US Army Reserve Unit in Las Vegas that operated Heavy Equipment Transport (HET) trucks and where he climbed to the rank of Sergeant. He was a proud American, and a man who was prepared and honored to serve his country. His unit was called to deploy to Iraq for Operation Enduring Freedom. His time in Iraq brought some significant changes into his life. He came home with PTSD and other health issues that he would deal with daily for the rest of his life. He also came home with a renewed respect and love for all things American and Veteran related. In 2008, Patrick had a PTSD incident which eventually resulted in his being incarcerated. His time in prison was a difficult time for the family, but even during this difficult time there was growth and many blessings—especially blessings of love and support from family and friends. He was released in December of 2017 and came to Utah to live. His life became very precious to him as he enjoyed his new freedom. He reconnected with old friends. He was thrilled to meet his grandsons and loved hearing about their progress. He bought a 4-wheel drive truck and a canoe so he could spend time in the mountains fishing and connecting with nature. He puttered around fixing things in his home and yard—always improving the foxhole. He spent hours talking politics with his mother as they “fixed the world” together. He was an avid Dallas Cowboys fan but would cheer (or couch coach) for other NFL teams as well. He loved animals, and when he was able to get a service dog, Mater, he was delighted. Mater became his trusted friend and companion. He then got Tater, a cute little kitten, to be Mater’s friend. But the thing that brought him the greatest joy in the last year was reconnecting with a dear friend, Kathy Day, and that romance came back into his life. On February 14, 2021, Patrick and Kathy were married in a beautiful ceremony in Beaver, Utah. They were just beginning to enjoy married life and were both looking forward to spending their twilight years together when he contracted Covid-19. Their time together was cut too short. Patrick is survived by his wife, Kathryn Day Lamoureux; his daughter Miça Merry Tacotaco (Phillip) and two grandsons. He is also survived by his mother, Patricia Lamoureux and his siblings, Chris, Laura, and Lida, and many nieces and nephews. The family would like to thank the staff at St. George Regional Hospital for their exceptional care, kindness, and compassion while Patrick was under their watch. We are also grateful to Serenity Funeral Home of Southern Utah for their services. Our deepest love and appreciation go to our family and friends for their overwhelming love and support through this difficult time. A funeral service will be held on Monday, 19 April 2021, at 11:00 am at the Utah Veterans Cemetery and Memorial Park located at Camp Williams (1700 West, Bluffdale, Utah). He will be buried with full military honors. In lieu of flowers, you can donate to help with costs associated with his death at https://gofund.me/615b4b93. Patrick would also encourage you to “Thank a Vet”.

The family of Joseph Patrick Lamoureux created this Life Tributes page to make it easy to share your memories.

Send flowers to the Lamoureux family.