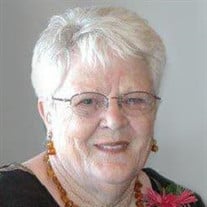 In the early morning of April 13, 2018, the world lost a wise and wonderful friend as Judith Anne Padovich Grisham, age 79, born November 1, 1938, in St. George, Utah, quietly graduated from this life into the next. After spending a large portion of her life in California, Judy returned to St. George in 1976, where she resided until her passing. A woman of great faith and immense charity, she will be missed by all who knew her. Judy, described as a “force of nature” by her loved ones, could do more in a day than most people do in a week. She was a champion of humanity and could always be relied upon to see the best in everyone. All who knew her felt safe in the warmth and shelter of her friendship. Judy loved to work in the yard and her green thumb could coax roses out of rocks. She loved to mow the lawn and work in her vegetable garden. She was enthralled by the grandeur of this beautiful earth created by a loving Heavenly Father. Dick and Judy could often be found going for long adventurous drives throughout the western United States interspersed by even longer cross-country journeys. One of her favorite drives was to Carmel, California. She was an avid genealogist as well as scrapbook enthusiast. She kept a daily journal for 56 years and her friends can often find their accomplishments chronicled in her histories. Known for her strong faith and love of her Savior Jesus Christ, Judy will be sorely missed by those she leaves behind, but they know that she has just graduated this life early and anxiously waits for them, proudly watching their accomplishments, as she looks forward to their joyous reunion. Judy, the daughter of Joseph and Melba Padovich, married Richard Earl Grisham, her eternal sweetheart and the only man she ever loved, in the St George Temple just 10 days after her 17th birthday. Their storybook love of sixty-two years was an inspiration to all who knew them. Judy is survived by her husband, Richard, 7 children, Laura (Gary) Griffiths, (Sharon) Grisham, Teri (Rich) Tobler, Linda (Terry) Avery, Lisa (Paul) Mace, David (Tricia) Grisham, Eric (Laura) Senior, 27 grandchildren, and 32 great-grandchildren. She was preceded in death by her parents and by a son, Curtis. Judy will be laid to rest in the Veyo Cemetery alongside her parents, grandparents, and other family members. Funeral services will be held at 11:00 am on Saturday, April 21, 2018, at the LDS Chapel located at 1184 N. Dixie Downs Rd. Viewings will be held on Friday, April 20, 2018, from 4:30 to 6:30 and Saturday, April 21, 2018, from 9:00 to 10:30 at the same location.

In the early morning of April 13, 2018, the world lost a wise and wonderful friend as Judith Anne Padovich Grisham, age 79, born November 1, 1938, in St. George, Utah, quietly graduated from this life into the next. After spending a large portion... View Obituary & Service Information

The family of Judith Anne Grisham created this Life Tributes page to make it easy to share your memories.

Send flowers to the Grisham family.