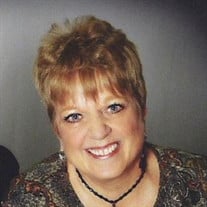 Karen Bowen Densley Our Sweet wife, mother, grandmother, and friend graduated from this earthly life on March 11, 2021 after a valiant battle with a debilitating disease. Karen was born February 10, 1950 to loving parents Vernon and Dorothy Bowen. She grew up in Farmington Utah and graduated from Davis High School in 1968. On July 27, 1972 she married Melvin D Wall and together they had two daughters. They later divorced. On November 17, 1984 she married the love of her life, James Bruce Densley, they were sealed in the Salt Lake Temple. Bruce and Karen have lived in Fruit Heights, Kaysville, Layton, and Virgin Utah. Karen was a faithful member of the Church of Jesus Christ of Latter-Day Saints and loving follower of her Heavenly Father. As she was called to different positions in the church she would answer faithfully and to the best of abilities. She loved to serve friends, family, neighbors and strangers. Karen’s greatest joy was her family and friends. She relished spending time with them and in her final days she was comforted to know that she will be able to be with you all again someday and had gained a strong testimony of eternal life. Her eyes were filled with light as each of you called, visited, and wrote to her. Karen is survived by her adoring and devoted husband, Bruce, and their 6 children combined. Destiny Densley, Shelley (Stephen) Tanner, Julie (Curtis) Page, James Densley, Wendy (Damon) Hooker, and Tonya (Wes) Nilson. Along with their grandchildren - Alex, Ashley (Adam), Shontae (Joshua), Makayla, Jazmyne (Nathaniel), Damon Jr (Harmony), Preston, Sylvia, Sabrina, Logan, Savannah, Hyrum and great grandchildren - Charlotte and Damon III. She is also survived by her Brother Gary (Elvida) Bowen, Sister Marcia (Dennis) Wilson and brother in law David Beddes. She is preceded in death by her parents Vernon and Dorothy and her sister Sandra Beddes. The family wishes to thank everyone for their love and support during this final trial of her life. We are truly blessed to have so much love from so many.

Karen Bowen Densley Our Sweet wife, mother, grandmother, and friend graduated from this earthly life on March 11, 2021 after a valiant battle with a debilitating disease. Karen was born February 10, 1950 to loving parents Vernon and Dorothy... View Obituary & Service Information

The family of Karen Bowen Densley created this Life Tributes page to make it easy to share your memories.

Our Sweet wife, mother, grandmother, and...

Send flowers to the Densley family.