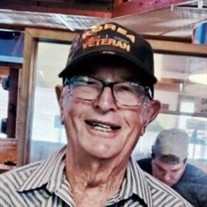 Karl Richard (Dick) Reinecker, age 90, passed away peacefully on March 22nd after a major hemorrhagic stroke. He was born on March 16th, 1932 in Inglewood, California to Hayden and Gladys Reinecker. On June 27, 1953 he married the love of his life, Shirley Ann Robideaux, in Northridge, California, where their mutual devotion to each other and love of music sustained them for over 67 years. Karl was raised in Inglewood, California, The youngest child of Hayden and Gladys Schaupp Reinecker, Karl worked very hard on the family owned-trailer park, including cleaning up after the Wire Fox Terriers his mother raised (which he hated). Karl met Shirley at Inglewood High School and they married in June of 1953. Karl was actively involved with his children through the YMCA, scouting, camping, motorcycling, and sailing. Karl loved the outdoors; hiking and fishing in the Sierra’s, and taking numerous family vacations exploring the western United States. Karl could play the clarinet and saxophone by ear and, with mom on the piano, they would make beautiful music together. Karl’s career started when he joined the USAF as a nuclear technician. He later became a quality control technical writer for North American Aviation, holding many positions within the aerospace industry. Ultimately, he retired as the Director of Finance for the Boeing Company on the B1 Program. Karl held a Master’s degree in Business and taught business classes at West Coast University. After retiring, Karl spent a year on the Los Angeles County Grand Jury and volunteered with many community and political organizations. Karl touched many lives with his caring, generous, and loving nature. Most of all, he will always be remembered for his incredible sense of humor and entertaining (if not always appropriate) ‘Dad’ jokes. Karl is survived, by his four children; Karl and his wife Cindy Reinecker, Mark and his wife Derene Reinecker, Karen and her husband Bill White, and Teresa Stine; their grandchildren Colette, Alyssa, Camille, Ryan, Melanie, Matt, Genessa, Tony, Catt, Vinny, and great-grandchildren Henry, Leland, Joey, Nora, Taylor, Aiden, Lucas, Danny, Damien, Finnegan, Maeven, Sophie, Tyler, Megan, and great, great, grandchild, Paisley. He was preceded in death by his wife Shirley, parents Hayden and Gladys Reinecker, sister Frieda, and brother Jerry. A Celebration of Life will be held at a date and place to be determined.

Karl Richard (Dick) Reinecker, age 90, passed away peacefully on March 22nd after a major hemorrhagic stroke. He was born on March 16th, 1932 in Inglewood, California to Hayden and Gladys Reinecker. On June 27, 1953 he married the love of his... View Obituary & Service Information

The family of Karl Richard Reinecker created this Life Tributes page to make it easy to share your memories.

Send flowers to the Reinecker family.