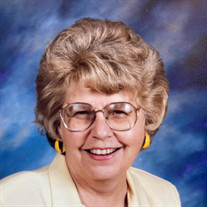 Kathryn Henrie Ipson, 85, passed away 24 June 2021 at her home in Cedar City, Utah. She was born 14 March 1936 to N. Orald and Ruth Heywood Henrie in Panguitch, Utah. She married her high school sweetheart, Doyl Ipson, 16 June 1954 in the Manti Temple. He passed away 9 November 2014. Kathryn was raised in Panguitch, Utah, the fifth of six siblings in a patient and loving family. Following her graduation from Panguitch High, she went on to study elementary education at the College of Southern Utah (now Southern Utah University) where she received the Mildred Sargent Womanhood Award. Doyl served a mission for the Church of Jesus Christ of Latter-Day Saints after they were married, and in the years soon after his return they adopted three children—JoAnn, Sandra, and James—who she considered her jewels. Work took the family to California and to Hawaii before landing them in Cedar City in the early 70s. Here she would resume her teaching career at South Elementary. She taught first and third grade and was beloved by her students who responded eagerly to her special blend of genuine love for each child and enthusiasm for learning. In 1991 she was teacher of the year for the state of Utah. She enjoyed singing and playing the ukulele and shared these talents freely with everyone. She also had a talent for gathering and preserving family history and researched and wrote several books. Kathryn was a devoted member of the Church of Jesus Christ of Latter-Day Saints and served in many different callings—as relief society president in six wards and two stakes and as primary president in three wards. She was thrilled that she and Doyl had the opportunity to serve a CES mission to South Africa. She is survived by: her children, JoAnn (Brian) Hall, Sandra Ipson, James (Lori) Ipson; an exchange student Susana Borrero from Cali, Colombia; nine grandchildren, Chani, Trevor (Dominique), Kelsey, and Tyler Hall, and Sara (Tanner) Karn, Ruth (Gavin) Hanratty, and Peter, Mary, and Matthew Ipson; and two great grandchildren, Serenity and Xarius Hall; She is also survived by a sister, Irene (Richard) Tebbs; a sister-in-law, Nila Ipson; and a brother-in-law, Boyd (Amber) Ipson; and many wonderful nieces and nephews. The family offers sincere thanks to the many friends and family members who over the years filled Kathryn’s life with friendship, love, and sweet memories. We will miss her deeply. Funeral services will be held on Friday, 2 July 2021, at 11:00 a.m., at the 16th Ward LDS Chapel. 320 South 1925 West, Cedar City, Utah. Viewings will be held on Thursday evening, 1 July 2021 from 6:00 to 7:30 p.m., and again on Friday morning, from 9:30 to 10:30 am., also at the Church. Interment will follow the funeral service at 3:00 p.m. at the Panguitch City Cemetery.

Kathryn Henrie Ipson, 85, passed away 24 June 2021 at her home in Cedar City, Utah. She was born 14 March 1936 to N. Orald and Ruth Heywood Henrie in Panguitch, Utah. She married her high school sweetheart, Doyl Ipson, 16 June 1954 in the Manti... View Obituary & Service Information

The family of Kathryn Henrie Ipson created this Life Tributes page to make it easy to share your memories.

Send flowers to the Ipson family.