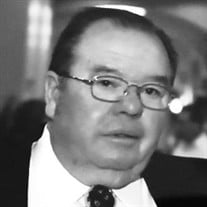 Saint George, Utah – Retired USMC, Kenneth W. Olsen, was called to his final duty station at age 80. He passed away peacefully after a short illness at his home in Sunriver Community on the afternoon of 6/1/2018 to accept his next assignment with dignity and honor to forever re-join his beloved wife, Shirley E Olsen. Ken is survived by son Charles P Olsen and Wife Debra Olsen of Saint Johns Florida, Son Michael J. Olsen and wife Shelly Olsen of West Valley Utah, 11 grandchildren, 4 great-grandchildren and his youngest brother, John L Olsen of Sparks, Nevada. Ken was preceded in death by his beloved wife of 55 years, Shirley E Olsen, his parents, 2 brothers, Gerald and Larry Olsen and his sister Sharlene Olsen Ken was always a devoted, husband, father, son, brother, and supportive friend of many throughout his life. Commitment and support to family, friends, and country were amongst his most valued achievements. He has been described by those who knew and loved him as, tough yet kind, intelligent but humble, and frugal yet generous. Ken was a man who always knew exactly who he was and steadfastly with honor accepted his responsibilities in life. Ken was born on 11/13/1937 in Goldfield Nevada to Charles Lawrence Olsen and Orvokki Naimi Koski. He grew up in the Goldfield, and Gabbs Nevada area and attended Gabbs High School. Ken entered the Marine Corps on December 6, 1955, attended Boot Camp in San Diego with advanced infantry training at Camp Pendleton. He completed many missions and assignments while living his reputation as a traditional “Marine’s Marine”. His early assignments included; 9th Marines at Camp Sukiran, Okinawa. 5th Marines at Camp Pendleton, I&I Staff for the 21st Rifle Company USMCR in Salt Lake City, UT. While stationed in Salt Lake City, he met his life long love Shirley on a blind date; it was love at first sight. The deal was sealed for Ken & Shirley as soon as they realized Shirley shared her birthdate of November 10th with the Marine Corps . They were married with many more happy missions to follow. While in SLC, Ken transferred to Marine Corps Aviation and trained as a reciprocating engine mechanic and was assigned to HMH-462, heavy helicopter Squadron, Tustin, CA. then on to HMM-361, which was re-forming when the Cuba missile crisis developed. The Squadron was deployed through the Panama Canal to Cuba aboard the USS Iwo Jima. In January 1963 he attended intensive training and was deployed to the Philippines, then on to DaNang Vietnam. He returned to the States in 1964 and he was assigned to the I&I Staff at Grosse Ile, Michigan, where he completed enlistment. After leaving the Corps, he returned to Reno, Nevada to work as an aircraft mechanic for the Nevada Air National Guard. Then on to Salt Lake City, UT. Utah Army National Guard as an aircraft mechanic, technical inspector, and shop foreman with advancement to the rank of First Sergeant for the Attack Helicopter Troop, 163rd Armored Cavalry Regiment. In 1983 he left the National Guard with a total of 28 years Military service to accept assigned with Dept. of Defense Army Aviation Systems Command as Logistics Division Chief to provide technical and logistical support for the Apache and Cobra helicopter programs with deployed Army Aviation Units before and during Desert Shield and Desert Storm. Aviation command assignments included Fort Carson, CO, Ft. Lewis, WA, Hawaii, Virginia, Arizona, Texas, Amman, Jordan, and Germany. With the boys grown, Ken and Shirley were able to enjoy traveling Europe together while on civilian post. After many years of serving his country and receiving numerous awards, he retired from Government Service in 1993 Upon retirement, Ken & Shirley moved to Beaver, Utah from where they built “Olsen’s Castle”, their 1st retirement home, followed later with a final move to their St. George, Utah home where they became active members of the Utah Dixie Marine Corps league. Ken was the Detachment Paymaster and made his mark again for the Detachment by developing a data base for membership and achieving full licensing status for the Utah Dixie Detachment with the Utah Division of Consumer Protection, Utah Department of Commerce. Thanks, Ken, for your service to this country, and thank you for your efforts on behalf of our Detachment. 2 separate memorial services are scheduled, • Saturday, June 16th, Olsen Family Reunion “Celebration of Life” 12:00pm - 7:00pm at the Home of Rochelle Olsen, 2525 16th Street, Sparks Nevada, 89431, All extended Family and close Family Friends are welcome, Please RSVP to Tina Olsen by calling 775-342-9461 or e-mail [email protected] • Saturday, 6/23/2018, Military Honors Memorial Services are scheduled at Sun River Veterans Memorial Park, Saint George Utah 84790 at 9:00am - 11:00am followed by a 2 hour reception at the home of Ken and Shirley Olsen 4627 First light Drive Saint George, Utah • As per one of Kens final requests, In lieu of flowers please send Charitable Donations in the name of Kenneth W. Olsen for distribution among Marine Corps League supported organizations to: Utah Dixie Detachment #1270, Marine Corps League P. O. Box 553 St. George, UT 84771 Thank you and God Bless, Semper Fi, The Olsen Family

Saint George, Utah &#8211; Retired USMC, Kenneth W. Olsen, was called to his final duty station at age 80. He passed away peacefully after a short illness at his home in Sunriver Community on the afternoon of 6/1/2018 to accept his next assignment... View Obituary & Service Information

The family of Kenneth W Olsen created this Life Tributes page to make it easy to share your memories.

Send flowers to the Olsen family.