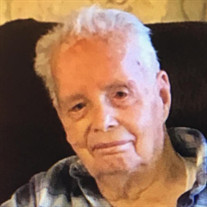 Kenneth passed away on Friday, June 12, 2020. He was born on February 18, 1928 to Clifford and Viola Murdock Spendlove in, Hurricane Utah. He graduated from Hurricane High School. He married his high school sweetheart Venice Whitney and they just celebrated 74 years of marriage. They had four children. Fredrick (deceased) (Linda Condie), Lynn (deceased), Danna (Bill) Engstrom, and Wendy (Ken) Lewis. Ken was a fruit farmer, he raised strawberries and peaches and peddled them door to door in Beaver, Milford, Richfield, and surrounding towns. Ken later sold his farm and bought a semi-truck and became a truck driver. He drove truck until he was 80 years old and yearned for it every day since. He was always looking in the newspaper for a truck driving job and just recently at the age of 92 said, “I should buy another truck and go trucking”, He drove through every state in the union. Ken’s favorite saying was, “I saw the world through the windshield”. Even though he was a long-haul truck driver he always made time for his family while he was home. He loved playing checkers when he was younger, along with Phase-10 and Monopoly when he was older. He loved four-wheeling, touring around to new places in the motorhome, reading Louis L. Amour books and in later years listening to books on tape. Ken had a passion for western movies, especially John Wayne. After Ken decided to retire, Venice and Ken became campground hosts at Duck Creek. He came out of retirement and started driving truck again part time until the age of 80. He loved his grandchildren, Tyler (Sharron), Cody (Jeannie), Tiffany, Nikki, Annalisa, Karson, and Parker. Great grandchildren, Daxton, Tyren, Tayden and Baby Tank. Linda Condie was an incredibly special daughter in law to Ken and kept in contact throughout the many years with Ken. A special thanks to our mom and Ken’s wife Venice, who diligently sat by his side this past year and was his partner in crime throughout the 74 years. An incredibly special thank you to Monique Hansen, (Dixie Hospice) for taking such great and loving care of Ken. Monique and Kenneth’s bond were a special blessing. There will be a Graveside Service for all of those who wish to attend at the Hurricane City Cemetery, (225 East 600 North) on Saturday, June 20, 2020 at 9:30am. If you would like to bring your own chair, please do so.

Kenneth passed away on Friday, June 12, 2020. He was born on February 18, 1928 to Clifford and Viola Murdock Spendlove in, Hurricane Utah. He graduated from Hurricane High School. He married his high school sweetheart Venice Whitney and they... View Obituary & Service Information

The family of Kenneth Murdock Spendlove created this Life Tributes page to make it easy to share your memories.

Send flowers to the Spendlove family.