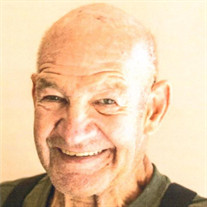 Born in Lehi on June 30, 1941, to Valarious Webb Zimmerman and Fern Virginia Hutchings. Kent Val Zimmerman was the second of four children. He met his wife Vicki Lynn Peterson in 1958. They were married in 1960 and had three children of their own. He and his family had many adventures in their dune buggy that are still recalled today. He also enjoyed being in the pit crews at the Utah State fairgrounds raceway where he passed on a love for race cars to his children. Kent, Vicki, and their family spent many years at their property in Current Creek and had many happy adventures. Kent became a Master Tool Maker at EDO where he worked until retiring. After retirement Kent and Vicki moved to the cabin they built with their children and spouses at Skyline Mountain Resort where they were an instrumental part of the golf community, including running and teaching Junior Golf for many years. Even after retirement Kent continued doing the things he loved. He taught his grandkids to drive in the Dune buggy he built, completed his hot rod, made wooden toys for his great grandchildren as well as many other children, drove an Indy car going 155 mph at age 70, and tricked people in thinking he was much younger while snowmobiling until the age of 77. Poppy always said he was so lucky to know his grandkids and great grandkids for many years as he did not get to know his own grandpa or great grandparents. He passed at the home of his daughter surrounded by love on the morning of December 3, 2021, at the age of 80 due to complications from Parkinson’s disease. Kent is survived by his loving wife of 61 years Vicki, his children Richard (Cindy), Troylinn (Jeff) and Scott (Laura), by his grandchildren Kyle (Aleisha), Cassidi (Robert), Jayci (Scott), Cheyanne, Corbin, Celeste, Callista, great-grandchildren Kamayla, Tripp, Liam, Rylee, Teegan, Trey, Camden, Kainan, and Morgan. He is also survived by his siblings Geri (Chuck) Martin, Ron Zimmerman, Judi Smith and many nieces and nephews. His family would like to thank the IHC Hospice team and his caring aide Hilda Farrar. We will be having a celebration of life in June 2022, where we will be sharing our favorite stories of Kent; details to be announced. He was loved by everyone he knew and brought many smiles to the faces around him with his own contagious smile. Contributions to the Parkinson’s Foundation in Kent’s name would be appreciated.

Born in Lehi on June 30, 1941, to Valarious Webb Zimmerman and Fern Virginia Hutchings. Kent Val Zimmerman was the second of four children. He met his wife Vicki Lynn Peterson in 1958. They were married in 1960 and had three children of their... View Obituary & Service Information

The family of Kent Val Zimmerman created this Life Tributes page to make it easy to share your memories.

Send flowers to the Zimmerman family.